Sometimes a picture says much more than a thousand words. Here we see the infamous volunteer Roger Williams harassing yet another peaceful Christian at this year's Arab Festival in Dearborn, Michigan. 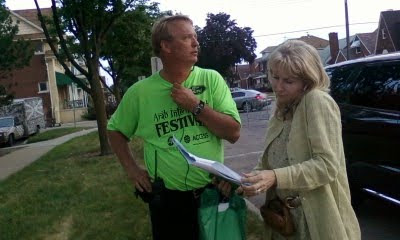 For those who don't remember Roger, he's the one who lied to police last year, claiming that we had surrounded him and that he asked us repeatedly to leave him alone, but we just wouldn't.

Roger even filed a false police report (which the city never charged him for), asserting that security actually had to rescue him from us! He then lied under oath in court (but wasn't charged), in a desperate attempt to get us convicted. (Note: Police testified at our trial that we weren't arrested based on Roger's complaint. They said that we were arrested for our supposedly riotous behavior when Nabeel was calmly answering the questions of Muslims who approached him.)

Based on Roger's actions, I didn't think there was much of a chance he'd be back for the 2011 Arab Festival.

Welcome to Dearborn, Michigan, where reality is never what you'd expect.

Three things are worthy of note in the above picture.

First, Roger isn't going after Terry Jones or Ruben Israel's group. He harasses quiet, peaceful Christians who attempt to discuss the Gospel with Muslims. The shocking thing is that Roger actually considers himself to be a Christian. He's from strange group that believes they can impress Muslims by attacking other Christians. Supposedly, after years of seeing people like Roger harass Christians (so the theory goes), Muslims will be attracted to Roger's unspoken Gospel message and will embrace Christianity. This absurd mentality is becoming increasingly popular in Dearborn, where the only Christians who are truly welcome are the ones willing to throw other Christians under the bus.

Second, despite the fact that Roger (a) threatened us, (b) lied to police, (c) filed a false police report, and (d) lied under oath in court, the Arab Chamber of Commerce had him back to continue harassing Christians this year. If Christians are really welcome at the festival, and if the Arab Chamber of Commerce really respects the Constitution, why would they invite a known liar and troublemaker to stalk Christians at the festival? I'm guessing this will come up in court.

Third, the woman in the photo is holding a copy of the court ruling declaring that Christians are free to distribute materials on the public sidewalks around the festival. Apparently, Roger and the other volunteers thought that some Christians might not be aware of the Thomas More Law Center's legal victory, and that these Christians could therefore be bullied and intimidated. Not so. Christians came armed with documentation and insisted on their Constitutional right to distribute pamphlets, DVDs, Bibles, etc. In a desperate attempt to shut these Christians down, the festival volunteers yet again lied to police and said they were harassing people. Fortunately, Wayne County Police didn't buy it. Kudos to Wayne County Police for showing more respect for the Constitution than Dearborn Police have shown, and to the Thomas More Law Center for spending hundreds of hours, pro bono, defending the rights of Christians in Dearborn.
Posted by David Wood at 8:27 PM

WOW, what a duffus, I hope you have some video on this :)

Roger is just being a good little dhimmi for massa Abdullah, see he get's to wear a nice neon T-shirt and even he gets to eat the scraps from massa's table in the Big Mosque. You militant field Christians should take note and learn how to best behave ..ya here!

He should change his name to "Judas Goat"

What he should do is repent and ask forgiveness!!

Praise the Lord for a victory! That guy is a coward. He needs to repent and be a real Christian man.