Muhammad's teachings in action. Muhammad allowed his followers to rape their female captives, and the Qur'an guarantees the right of Muslims to use their captives for sex. Politicians and the media condemn the practice, but they praise the religion that promotes the practice. This is madness.

In Iraq, Yazidi women have been confined to a "brothel," where they are raped by jihadists. Who's in charge of controlling the sex slaves? A brigade of female jihadis, many of them British. 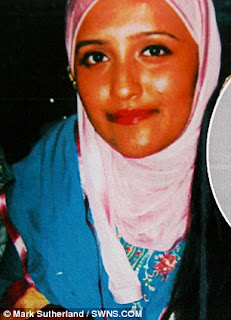 Daily Mail—Thousands of Iraqi women are being forced into sex slavery in brothels run by a 'police force' of British women jihadis, it has been reported.

As many as 3,000 women and girls have been taken captive from the Yazidi tribe in Iraq as Isis militants continue their reign of terror across the region.

Sources now say that British female jihadis operating a religious police force called the al-Khanssaa brigade, that punishes women for 'un-Islamic' behaviour, have set up brothels to for the use of Isis fighters.

A source told the Mirror: 'These women are using barbaric interpretations of the Islamic faith to justify their actions.

'They believe the militants can use these women as they please as they are non-Muslims. It is the British women who have risen to the top of the Islamic State’s sharia police and now they are in charge of this operation.

'It is as bizarre as it is perverse.' (Continue Reading.)

Hmmm. Where on earth did these "militants" get the "perverse" idea that they can use non-Muslim women "as they please"? Odd that reading the Qur'an and believing exactly what it says now qualifies as a "barbaric interpretation."

Thanks David and your team explaining hidden truth about Quran and its power. Now it is not difficult to understand that power of Islam comes from sex and violence and Quran is the source. That is why even after collapse of evil Hitler of Germany and Soviet Union, Islam is still surviving dreaming of bringing back Dark Age of Muhammad time with barbaric Sarai Law in 21st Century.

Your acts are more than Obama’s aerial bombardment to destroy ISIS from the face of the earth. May light of Jesus Christ shine upon you in fighting devils!

Today is September11, world remember with solemnly loss of 3,000 souls by four coordinated terrorist attacks in Twin Tower in Ground Zero in New York, Pentagon in Washington and in Pennsylvania by Islamic group al-Qaeda powered from verses of Quran. Civilized world must attack source of power of devils to destroy them from face of the earth once for all. Otherwise one al-Qaeda dies another ISIS grows with mighty power from sands of Arabian deserts.