ISIS Repeats the Atrocities of Muhammad Step by Step

It still amazes me how the media will tell a horrific story about the brutal actions of ISIS but have absolutely no idea that ISIS following Muhammad's example to the letter. Let's look at an example.

After the Meccans gave up at the Battle of the Trench, the Muslims went home. That's when "Gabriel" came to Muhammad and ordered him to attack the Jewish tribe of Qurayza. After the Jews surrendered, Muhammad separated the men from the women and children from the grown men, brought the grown men to a trench, beheaded somewhere between 600 and 900 men, turned the women into sex slaves, and enslaved the children. Here's a passage:


Then they surrendered, and the apostle confined them in Medina in the quarter of d. al-Harith, a woman of B. al-Najjar. Then the apostle went out to the market of Medina (which is still its market today) and dug trenches in it. Then he sent for them and struck off their heads in those trenches as they were brought out to him in batches. Among them was the enemy of Allah Huyayy b. Akhtab and Ka`b b. Asad their chief. There were 600 or 700 in all, though some put the figure as high as 800 or 900. As they were being taken out in batches to the apostle they asked Ka`b what he thought would be done with them. He replied, 'Will you never understand? Don't you see that the summoner never stops and those who are taken away do not return? By Allah it is death!' This went on until the apostle made an end of them. Huyayy was brought out wearing a flowered robe in which he had made holes about the size of the finger-tips in every part so that it should not be taken from him as spoil, with his hands bound to his neck by a rope. When he saw the apostle he said, 'By God, I do not blame myself for opposing you, but he who forsakes God will be forsaken.' Then he went to the men and said, 'God's command is right. A book and a decree, and massacre have been written against the Sons of Israel.' Then he sat down and his head was struck off. (Ibn Ishaq, 464)

A bit later we read: "The apostle had ordered that every adult of theirs should be killed" (p. 465). How did Muhammad know who had reached puberty and who hadn't? Someone who survived the ordeal tells us: 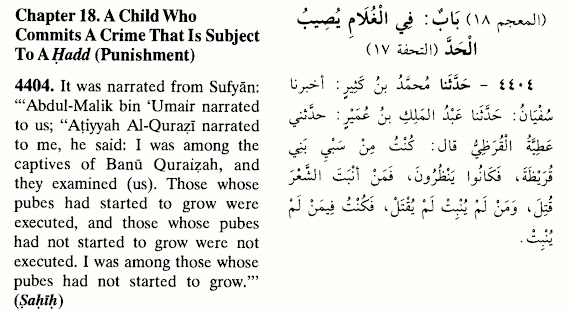 The women and children were divided among the Muslims, and some of the women were traded for weapons:


Then the apostle divided the property, wives, and children of B. Qurayza among the Muslims, and he made known on that day the shares of horse and men, and took out the fifth. . . . Then the apostle sent Sa'd b. Zayd al-Ansari brother of b. Abdul-Ashhal with some of the captive women of B. Qurayza to Najd and he sold them for horses and weapons. (Ibn Ishaq, 466)

Now let's read an article about ISIS rounding up Yazidis and Christians, separating the women and children from the men, checking the pubes of young people to make sure they hadn't reached puberty, killing around 800 men, and taking the women and girls away as sex slaves.

Sound familiar? Not to the media, who are gagged by their own cowardice. 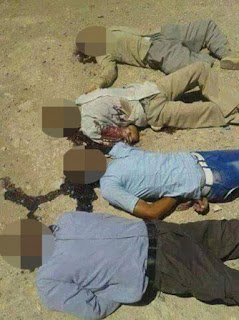 Daily Mail—A Yazidi refugee and his two nephews have told how they had to play dead to survive after they were rounded up, forced to stand next to a ditch and shot by laughing ISIS soldiers in a massacre which killed 800.

Once ISIS overran their town last August, the Yazidis were herded into a school and their armpits were inspected.

The women and girls were put on one side of the hall, to be taken away as sex slaves, while the men were lined up on the other.

Those with underarm hair were judged to be older than ten - and old enough to be murdered.

The 'men' were then split into two groups; those willing to convert to Islam and those who wanted to remain Christians.

The Christians were told that they would be taken to the Sinjar mountains and freed.

But it was a trick – and instead they were put into trucks and taken to killing fields around the village of Kojo, northern Iraq, where they were made to stand by mass graves and executed.

Khalaf – whose name has been changed to protect his identity – told how he was one of 800 men shot at, but survived.

He was too scared to move or even breathe as he laid, covered in blood from other victims, as dead bodies fell on top of him.

Khalaf’s two brothers were murdered that day, but his two nephews Kameel and Jamal, again, not their real names, lived by laying in the grave for hours while soldiers walked along checking for survivors.

If they found anyone still alive they were shot in the head to be sure they were dead.

A man lying next to Khalaf in the ditch was found by an ISIS fighter to still be breathing, so he was shot three times in the head.

Speaking from a refugee camp in Iraq, Khalaf, 42, told MailOnline: 'They [ISIS] took everybody to the big school inside Kojo. They took everything from us – telephones, money, gold.’

The jihadis ordered men and boys over the age of 10 to stand on the right and women and other children on the left.

'They tested to see if the boys had underarm hair,' he said.

The fanatics used this crude test to determine whether the Yazidi boys were old enough to be slaughtered. (Continue Reading.)

To understand what Islam teaches about non-Muslims, watch this:

Despite all this atrocities, Islam is on the move. Many intelectual Christians and Jews and Atheist embraced Islam. There is something unique about Islam that make them convert. One thing I know, Islam is workable (related to issues in their life), Christianity is full of munafiqun (hyprocite). All praise to Allah swt...

Where is OSAMA ABDALLAH, the great Islamic think tank and scholar? I am expecting from him to defend Muhammad and his Allah as kind and merciful as Muslims say, not as we find in real world as instigator for terrorist activities that even evil get scared. What an evil faith that even new Muslim convert right way participate actively in heinous crime killing fellow human following footstep of Muhammad’s historical evil works against humanity instead of good work for society, as Christ did for all mankind. Where are you Osama, say something!

Mr. Osama how dare are you to say that Holy Bible is corrupted where God’s commandments for His faithful to be kind and merciful to others as God is merciful to mankind. As a result Muslims in Christian countries are enjoying more freedom than Muslim country itself. Do you know God’s punishment for false testimony? This month Ramadan, your so called holy month and Muslims celebrate holy month with blood of fellow human. Shames on you, as well as those Muslims like HEZKIEL FEROZ who says “Muslims are on the move”. Yes Muslims are on the move with evil spirit. Feroz is a stupid, madrassa educated, who does not know meaning of workable, otherwise he would give practical example. Islam is unique because it is devil's religion where evil spirit is worship.

With all these atrocities around the world do we need further proof who Muhammad was, Osama and Feroz? Turn around and save your own soul from burning in hell fire after your death before you protect Muhammad and his allah. Believe it or not you worship power of devil who has no hearts for love, mercy and kindness towards fellow human.

Hezkiel Feroz, we are not concerned :) Our Lord warned us of the many antichrists that would deceive the masses and the falling away of some 'faithful' to these false prophets. What is more concerning is your apparent complacency at the acts of your 'prophet'.

Come to God brother! The Author of Love and Life!

I don't think any person embracing Islam could be described as in 'intellectual' and I don't think there is evidence to back up your claim about conversions. The only significant evidence I see is of sub-par intelligence convicted criminals joining it.

Plenty of people are leaving Islam of course, many many more are doing this without making it obvious because they fear the consequences.
As we all know, Islam is the only religion that is so lacking in good points that it has to threaten death to those that leave or criticize it.

Islam is workable: if you like poverty, misery and abusing non Muslims. If you prefer progress and getting along together, modern Christianity is a better choice. It is no longer wholly constrained by outdated dogma.

Probably not the best forum for dawah t.b.h.
Peace

Nojmul Huda: Osama is doing what he does best, hiding (I'd saying it's making excuses and lying, except he's terrible at that).

I suspect you are a troll, but whether you are or not saying Islam is on the move, again and again, means nothing and you know it.

Could someone explain to me the ignorant why u.s. gov. didnt give isis ultimatum to leave people alone ..or send them off to other countries with funds..or bomb ISIS to smithereens? Is U.S. afraud of them...? Why didnt they help these people and set precedent. Why didnt U.S. Christians force gov to give ISIS ultmatum. Bullies only understand power greater than them.

Why doesnt U.S. and west crack down on koran and islam make them illegal to own or practice..based on murder of everyone content ..penalty deportation to islamic state country permanent no future plane rides to west ever.
Muslims must denounce islam publicly ..make muhamad name illegal..all who have must change it in honour of all the murdered buctims of islam to date must tally in the billions including jerusalem muftis influence even on hitler against the jews.