Tunisia: At Least 37 Dead in Terrorist Attack at Seaside Resort

At least 37 people are dead in a terrorist attack at a resort in Tunisia.

But in order to show how "tolerant" they are, politicians and the media will take this opportunity to praise and defend Islam. 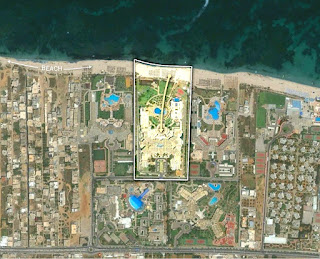 TUNIS (New York Times) — At least one gunman disguised as a vacationer attacked a placid seaside resort in Tunisia on Friday, killing at least 37 people at a beachfront hotel — many of them foreign tourists — before he was shot to death by security forces.

It was the second major terrorist attack in a little more than three months targeting the Tunisian tourist industry. It sent shockwaves through the country, which was still recovering from the first assault, a massacre at a museum in the heart of the capital in March. President Beji Caid Essebsi rushed to the resort and promised tough new security procedures.

The audacity of the assailant, armed with a Kalashnikov rifle, suggested a sharp escalation from the relatively low-level political violence that has bedeviled Tunisia since its Arab Spring revolt four years ago.

Government officials and witnesses offered conflicting accounts of the assault, with some saying that two gunmen, who had possibly come ashore in a rubber dinghy, had ambushed tourists at the Imperial Marhaba Hotel in Sousse, which is popular with German vacationers.

Others said that there was a single gunman but that the police were searching for possible accomplices. There were unconfirmed reports that the violence had extended to a second hotel.

At least 20 people were wounded in the attack, including five British tourists and five Tunisians, who were being treated at a city hospital, Tunisian news media reported.

The nationalities of the other victims were not immediately clear, but witnesses said many appeared to have been foreigners, including some children. The BBC reported that “Tunisians, Britons, Germans, Belgians and at least one Irish citizen were among the dead.”

The victims were gunned down on the beach, at the hotel pool and in the lobby. Some said it took the police and security officers at least 30 minutes to respond after the shooting started just before noon. (Continue Reading.)

Islam is the sum of all fears. 9/11 was a sum-of-all-fears event. The threat can be literally anything, and it can come from literally anywhere.

Please correct me if I'm wrong, but my understanding of the phrase "the sum of all fears" is that it was coined by Winston Churchill when he said "Why, you may take the most gallant sailor, the most intrepid airman or the most audacious soldier, put them at a table together- what do you get -the sum of all fears". He was arguing for decisions being made by one strong leader, rather than through a complex system of consultation where individuals fears could result in indecision (ie. the sum of all fears).

I wasn't clear why this would make Islam "the sum of all fears" or the World Trade Tower attacks a "sum-of-all-fears event" and was wondering if you could explain. :)

Also, I do appreciate that this is horrific but I wonder if your last sentence doesn't actually work toward increasing that sense of terror rather than addressing it. I know that you would be aware that the threat can "literally" NOT be anything, and it can "literally" not come from anywhere.

Apart from the incorrect us of the word "literally", hyperboles like these only serve the purposes of extremists, militants and fanatics. I know that you are not one of those King, but it is perhaps just as important that we don't allow ourselves to sound like them.

I sound like such a mother sometimes, don't I? :)

I have read your other comments and I hope you won't mind me saying that hyperboles like as the comment you've written above are beneath you and serve only to encourage a hysterical response.

The way I heard it was like this: Imagine a small boat floating into New York Harbor. On it is a small box. But that box contains a deadly nuclear weapon that goes off. It could easily blow at least half of New York City away.

The way we now think of "the sum of all fears" comes from the Tom Clancy novel about a nuclear weapon. Yes, he did take the name of the novel from that phrase, but it's in his context that most people know of the phrase today.

9/11 put together a number of different fears: acrophobia & flying, not to mention possible others. Not only that, but it turned everyday items & places into weapons & death traps.

Just this year, Answering Muslims posted about that Muslimah who plowed into an airport's glass doors with her car and drove into the building. Fortunately, no one was hurt, but she was motivated to do so by the hope of killing non-believers. When was the last time a Christian, a Hindu, or even an atheist got an urge this insane? And who walks through an airport looking for cars to plow through glass doors? Should we all have to be prepared for an event like that?

We live in a time when anyone can be driven by anything to do anything. Say my comment is funny, but I wasn't trying to be funny - Islam is looking for any crack to exploit & make bigger. It doesn't help that jihadists wish they had the bomb, which we should be thankful that they don't. Iran really isn't making things easier on us in this regard, though.

The first step towards lessening this tension would be, of course, to get rid of Islam. Because these attacks won't stop until that religion is gone. Nowhere is truly safe, and no one is truly safe, from the crazies who adopt this religion and follow it to the letter.

So yes, the threat can be literally anything, coming from literally anywhere. Airplanes, cars, buses... anything can be used as a weapon. Office buildings, airports, vacation resorts... any place can turn into a death trap. Compare this to, say, just a hundred years ago, or a hundred years before that.

And extremists (read real Muslims) are taking full advantage of it. You take away one thing they use as a weapon, they'll find another.

And I fail to see how such an assessment is an overreaction in light of such a deadly attack as this one. These people weren't on the front lines of a battle, so they had no reason to expect getting shot.

PS "World Trade Tower attacks" neglects the Pentagon attack or the victims of Flight 93. It wasn't just an attack on the WTC, even if that were the worst of it.

Oh, and I forgot to add: The threat can be anyBODY as well. Anyone keeping count of how many converts in America decide to try to carry out terrorist attacks? People young & old, freshly converted & longtime hardcore believers, are deciding to turn to jihad against America. They're downloading instructions on how to build bombs. They're subscribed to jihadist news. They're reading Muhammad's words & deeds and taking them at face value. They're scoping-out busy public areas looking to cause maximum casualties.

You say my assessment is funny, I say it's true. And I don't find it funny.

Thanks for your explanation about your understanding of "the sum of all fears". That was very helpful. I'm probably going to stick to the original meaning myself, but knowing how popular media has redefined it was very helpful.

I did not say, or even imply, that your assessment was "funny" or an "overreaction". I actually took everything you wrote very seriously for it is indeed a very serious matter. I actually acknowledged the extreme horror of this situation, but suggested that comments that tell people that they are "literally" never safe, promote the hysteria and reactions that the enemy needs to survive.

You seem to feel that you need to convince me that Islam is an evil ideology. You do not.

But where we do parts ways is that I do not believe that Islam is the embodiment of all evil. No, this privilege is assigned to Satan, and Satan will and has used whoever he wills to do his work of destroying lives. Satan is not, however, unstoppable, nor is he omnipresent or omnipotent. He was defeated by the cross, and lives in the limitations of that defeated state.

Islam is just one of his many attempts to turn people's hearts away from God and keep them from the forgiveness that will set them free. Attacks on people's lives and freedom preceded Islam, and they will continue on after Islam. You under-estimate Satan if you think that Islam is his only strategy, and you over-estimate him when you prescribe to his strategies virtually unlimited power.

Telling people that Satan can do anything, at anytime is as dangerous as telling them that he's harmless. He is constrained by even a young child who trusts the Lord. If Satan has limitations then so must everything he does.

These events are hideous, but don't kid yourself, "hideous events" have been a part of mankind's narrative since Adam and Eve left the garden. The world does not need to be rid of Islam, it needs to be rid of evil! Conflating Islam to be Satan may sound appealing, but it is not fact! It will not change anything other than to keep people looking over their shoulder when they should be looking to God!

Also you will not prove Islam is wrong by comparing it to other religions or ideologies. Especially by saying it's not as bad as atheism or Hinduism when atheists like Pol Pot, Mussolini, Stalin, Kim Jong II, Mao Tse Tung have been responsible for murdering millions upon millions in bloody "insane" campaigns. Hindus have sanctioned murders, gang rapes, desecration of holy places and support a caste system that hides a multitude of unspeakable evils.

You talk about "threats" King, but the greatest threat to Christians is not realizing that because of Jesus' death and resurrection we are no longer fighting for the victory, we are fighting from the vantage point of victory!