So far, our leaders' strategy for dealing with the rising tide of terrorism has been to praise Islam and pretend it has nothing to do with terrorism. That strategy doesn't seem to be working. 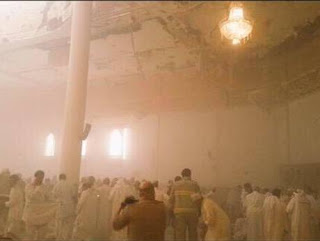 BBC—The death toll from a suicide attack on a Shia mosque during Friday prayers in the Kuwaiti capital has risen to at least 27, the interior ministry says.

Another 227 people were wounded, it added. Images circulating online show bodies on the mosque floor amid debris.

The blast hit the Imam Sadiq Mosque in a busy area to the east of Kuwait City.

An Islamic State-affiliated group said it was behind the attack. IS has carried out similar recent attacks in neighbouring Saudi Arabia and Yemen.

However, this is the first attack on a Shia mosque to take place in the small Gulf state.

A Kuwaiti MP, who saw the attacker, said the mosque was packed with some 2,000 people when there was a loud explosion, Reuters reported.

"It was obvious from the suicide bomber's body that he was young. He walked into the prayer hall during sujood [kneeling in prayer], he looked... in his 20s, I saw him with my own eyes," Khalil al-Salih told the news agency. (Continue Reading.)

Why would a young jihadist blow himself up in the name of Allah? Watch this to find out:

I know that this must shock you, I know that people will say to you that Muslims are also dying in these attacks therefore this is not about Islam. I know that the shocking murders that occurred in this mosque must grieve you, as they should all of us. But please don't allow men to offer you explanations that only explain these things in portions, but not in whole. This cannot be understood unless you step back and look at all the facts.

These murderers believe they are fighting for you, that through their obedience to the Qur'an they will enrich Dar al-Islam and shake off the vestiges of Western corruption, to bring about a more perfect society. They consider themselves "moderns" who are restoring truth by obeying the teachings of the Qur'an that superseded the ones that you appeal to. Theologically and academically, they have the stronger argument!

To them, you are wayward children who are standing in the way of progress, and therefore blocking the right path that Allah has set for his believers to follow. They and their scholars laugh and pour derision on your re-interpretations and layers and layers of arguments that assert that Islam can peacefully co-exist with democracy, and that Islam abhors violence. They too love peace, but are committed to achieving it the way the Qu'ran taught and the way Mohammad exampled.

In centuries past, these men would hardly be called terrorists, these men would be called Islam's warriors obeying Allah's call to bring the world under submission. The fact, and I choose that word carefully, is that every Muslims knows that it is a directive from Allah to try and that bring the whole world under Islamic rule. Certainly, these men are using extreme measures, but they are doing what Allah commanded them to do, and what the Qur'an prescribes for them to do.

The real argument that you have with these men is therefore about not about intention, but about METHOD.

I implore you, consider these questions.

Islam teaches that there is good and evil, and these are absolute concepts. This being true, how clear does the Qur'an (the whole Qur'an) makes these distinctions, and how does it empower you to fight against evil? Hyperbole

Similarly, those you dissociate from also believe they are fighting on the side of good. How well does the Qur'an empower these men to fight for what they perceive as good?

If the answer is "equally", then you should ask 'what kind of deity, in his final revelation, both empowers men to do good and men to do evil?'

If your Imam, Mullah, or whoever, begins to tell you about the evils of other religions when you ask him this questions, or starts telling you that Allah has left it up to man to make a choice, I hope you will realize the answer is being avoided.

If the Qur'an is a revelation of the right path, then it will empower men towards good and stop them in pursuit of what is evil. If we are not seeing abundant evidence for this, then you would do well for yourself, and those you love, to question what you've been taught.