Sunnis and Shias have been killing each other for nearly fourteen centuries. But we're not allowed to have a serious conversation about the violence, because that would require a discussion of Muhammad's teachings. So the violence continues, with no end in sight. 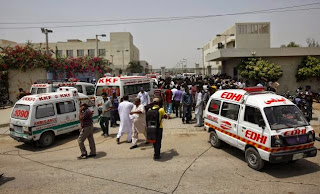 Reuters—Gunmen on motorcycles boarded a bus and opened fire on commuters in Pakistan's volatile southern city of Karachi on Wednesday, killing at least 43, police said, in the latest attack directed against religious minorities this year.

The pink bus was pockmarked with bullet holes and blood saturated the seats and dripped out of the doors on to the concrete.

"As the gunmen climbed on to the bus, one of them shouted, 'Kill them all!' Then they started indiscriminately firing at everyone they saw," a wounded woman told a television channel by phone.

Police Superintendent Najib Khan told Reuters there were six gunmen and that all the passengers were Ismailis, a minority Shi'ite Muslim sect. Pakistan is mostly Sunni.

Militant group Jundullah, which has attacked Muslim minorities before, claimed responsibility. The group has links with the Pakistani Taliban and pledged allegiance to Islamic State in November.

"These killed people were Ismaili and we consider them kafir (non-Muslim). We had four attackers. In the coming days we will attack Ismailis, Shi'ites and Christians," spokesman Ahmed Marwat told Reuters. (Continue Reading.)

I can't believe it! Muslims killing muslims? Say it ain't so! Over because of their religious beliefs? I thought islam is a "religion of piece!"

I found some very interesting facts about the Ismaili sect targeted in the attacks. This information is from the Twitter account of Ali Rizvi, an atheist ex-Muslim born in Pakistan and currently living in Canada. According to Ali, the Ismailis are a reformist, pro-West and pro-secular sub-sect of Shia Islam. Here's the article:

There's also some very interesting tweets on the front page of the Twitter account of Alishba Zarmeen, an atheist ex-Ismaili also born in Pakistan and currently living in the West. Her Twitter account is here:

According to her, the Ismailis have outsized contributions to modernization of Pakistan relative to their numbers.