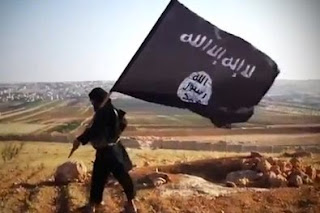 BBC—Jihadist militants from Islamic State (IS) have burned to death 45 people in the western Iraqi town of al-Baghdadi, the local police chief says.

Exactly who these people were and why they were killed is not clear, but Col Qasim al-Obeidi said he believed some were members of the security forces.

IS fighters captured much of the town, near Ain al-Asad air base, last week.

Col Obeidi said a compound that houses the families of security personnel and local officials was now under attack.

He pleaded for help from the government and the international community. . . .

Al-Baghdadi had been besieged for months by Islamic State fighters before its fall on Thursday.

It had been one of the few towns to still be controlled by the Iraqi government in Anbar province, where IS and allied Sunni Arab tribesmen launched an offensive in January 2014.

He said it was the first time in the last couple of months that the jihadist group had taken new ground.

However, Ain al-Asad air base, where about 320 US Marines are training members of the Iraqi army's 7th Division, is only 8km (5 miles) away.

The base was itself attacked by IS militants, among them several suicide bombers, on Friday. The militants were eventually repelled by Iraqi troops backed by US-led coalition aircraft. (Continue Reading.)

To understand why ISIS is burning captives, watch this:

Wow they did it. After reading the Atlantic Monthly article on ISIS it all makes sense now.

You would think that after they burned alive the Jordanian pilot and witnessed the condemnation from around the world they would say "Ok that was a little to much lets not do that again."

But no they didn't instead they saw the condemnation from around the world and said "Hey lets do that again, lets really piss off the world. Instead of one apostate lets burn 40 more. Now this ought to do it"

You guys do a good job but you could let muslims talk a bit more without interruption in regards to phone in calls. It seems you a and Sam tend to jump the gun to quick regarding rebuttles.

Criminals do not have code of ethics. Killing non-believers are acts of criminal, acts of evil, everybody knows it. It is all the same to kill by fire or by sword. Islamic history proves that brutality and terrorism among Muslims faith came not from few terrorists in modern time, who are poor, illiterate, unemployed and uncultured, as President Obama, Osama Abdullah and so called moderate Muslims believe. It is rooted in core value of Islam.

Until world leaders especially American Administration acknowledges the truth, they are playing with innocent blood of you, me and everybody. There is no security walking on the street of America or in European countries except in Muslim countries. Jihadists will ask your religion first before they stab or burn you.

Europe and America are wasting time trying to win hearts and minds of Muslims before they defeat ISIS. ISIS are not sitting idle, they are now drawing hearts and minds of young Muslim women. Recently three teenage girls from UK headed to join ISIS in Iraq to boost up their morale.

Evil is not so easy to defeat, otherwise Jesus Christ would have not to die in the cross to save us from evil. Islamic history speaks volume for Muslims heart and mind, which is won not by love but by sword alone. Ignoring truth about Islam’s core value is nothing but helping ISIS to be ready for next big move in America and Europe and put us into more trouble like 9/11 tragedy.

Thank you David Wood for exposing truth and hope somebody in Obama Administration watch your video and learn from Islamic history.

ISIS is following the foot steps of their prophet

The Prophet said, “No prayer is harder for the hypocrites than the Fajr and the ‘Isha’ prayers and if they knew the reward for these prayers at their respective times, they would certainly present themselves (in the mosques) even if they had to crawl.” The Prophet added, “Certainly I decided to order the Mu’adh-dhin [call-maker] to pronounce Iqama [second call to prayer] and order a man to lead the prayer and then take a fire flame to burn all those who had not left their houses so far for the prayer, along with their houses.”


Latest news tells about three young Muslims girls heading to Syria and if we hear what their parents saying "Don't go ISIS" "those are Zionist" "They are evil men" "They are not really Muslims"
"ISIS is kufar" ... NOT

My friend Osama is exposed
He failed to give us any link to answer ISIS, BOKO HARAM ... etc
He is busy trying to answer Christians who loves him and expose Islam as Evil
He failed to pray for Muslims who fight ISIS(the Zionist)!


Be careful Osama, Issa is not coming back to break the cross but Jesus will return with His winnowing fork is in his hand, and he will clear his threshing floor and gather his wheat into the barn, but the chaff he will burn with unquenchable fire.”

You have been warned ...