British Court Upholds Ban on Critics of Jihad and Sharia

According to the government of Great Britain, peaceful critics of jihad and sharia should be banned from the country. After UK Home Secretary Theresa May banned Robert Spencer and Pamela Geller in an effort to win the hearts of jihadists, many defenders of free speech (even many who do not agree with Spencer and Geller) were hopeful that the decision would be overturned. Unfortunately, the British courts are no less resigned to the death of British values than Theresa May.

Given endless cases of Muslim grooming gangs raping British girls, Muslim suicide attacks on British trains, and Muslim converts butchering a British soldier in broad daylight, one would think that the British government would be careful to protect open discussion of the ideology that calls for the subjugation of Great Britain. However, to assume that the British government would stand up for British values is to assume the presence of a backbone where no backbone exists.

Let us all hope that the United States and Canada take note of such cowardice and never sacrifice our rights on the altar of political correctness. 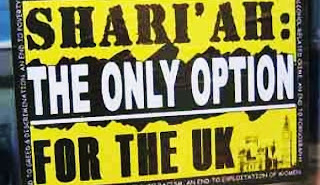 Jihad Watch—A British Court of Appeal handed down its judgment dismissing our appeal challenging our ban from entering the United Kingdom. The key element of its decision is its emphasis on the fact that “this was a public order case where the police had advised that significant public disorder and serious violence might ensue from the proposed visit.” In writing that judgment, Lord Justice Tomlinson (with whom Lord Justice Patten and Lord Justice Floyd agree) have only made it clear that the British government has decided to set aside established law and the freedom of speech in order to appease violent Muslims.

Will the British government now ban Jews from the country so as to “prevent public disorder,” since the presence of Jews has been shown all too often to upset some Muslims and cause them to riot? The judgment permits such a Nazi approach.

In upholding our exclusion from the U.K., the judges relied heavily on a November 2014 British Supreme Court ruling that Maryam Rajavi, an Iranian dissident, could be lawfully excluded from entering Britain because her doing so could damage Britain’s relationship with Iran.

Their reasoning is deeply flawed. Our ban was put in place in June 2013, so a November 2014 ruling should have no bearing on it. This is tantamount to changing the rules after the game has started. What’s more, one of the judges in the Supreme Court decision applied by the British Court of Appeal wrote stating that the Supreme Court case was “not a judicial review of the lawfulness of the decision of the Secretary of State that the admission of Mrs Rajavi to this country would not be conducive to the public good.” Rajavi was excluded because her admission would supposedly hurt Britain’s relationship with Iran, but there were no foreign policy issues in our case where the exclusion is alleged not to be in the public good.

Even more ominously, this dismissal of our appeal sets the precedent that those whose speech is unpopular with the British government can be banned from the country. It strikes what could be a fatal blow to the very heart of the doctrine of the freedom of speech: that speech that is unpopular, and may even be offensive to some must be protected, as a safeguard against tyranny. Offensive speech is permissible even in British law, which the British Court of Appeal ignored in order to appease the government. (Continue Reading.)

In reality for political correctness, British bowed down to 1.6 Muslims who directly/indirectly favor islamization of Europe. In the past Ottoman Empire failed to conquer Europe by Army, but this time Army of Muhammad by population growth seems to conquer England by threat of terrorism. Freedom is right, not mercy of Islam. Muslims are killing by the name of Allah-Hu-Akbar by teaching from Quran and no one could defend his/her life exposing truths about Muhamad and his book Quran.

I wish the Britain oldest democracy of the world does not surrender to rule of terror. Muhammad was a false prophet. In electronic age Muslims will slowly but surely know the truth about Muhammad and their eyes will be open to find that God’s people cannot be like Muhammad.

I am getting more and more disappointed with Europe everyday, but in particular the UK and France. And because I've lived in the UK, it just makes the whole thing even more sickening.

As lame as this is, I cannot help but find catharsis to use against any British atheist proclaiming the joys of being a lowly serf compared to a citizen and clamoring for 'The Separation of Church and State' when his own government has just thrown that idea out the window in the name of appeasement.