Here's Sunan Abu Dawud 4361 (4348 in some editions), in English and Arabic, along with the rating (sahih). In this hadith, a man kills the mother of his children for speaking against Muhammad. Muhammad, in response, says that no one is to punish the man.

So when Muhammad's own companions killed critics of Islam, and Muhammad approved, why do politicians, the media, and Muslim groups keep insisting that killing critics has nothing to do with Islam? 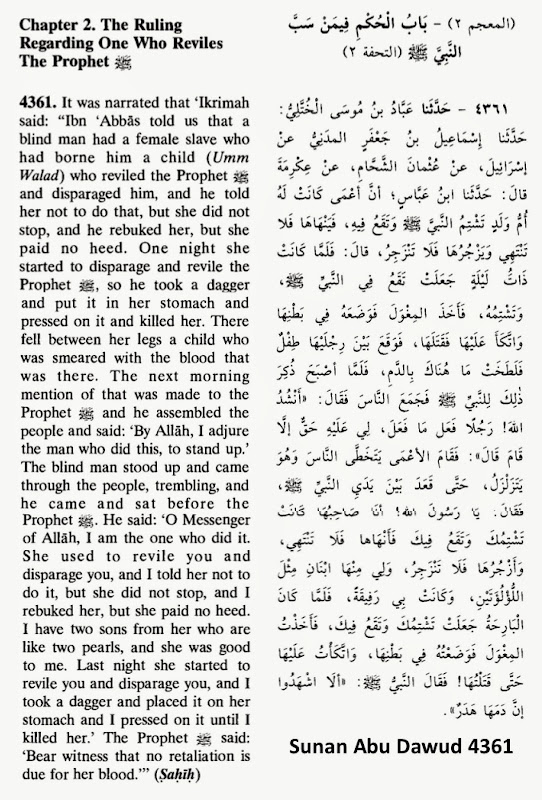 When would civilized people come to sense to say enough is enough, Quran is axis of all evils and let us ban Quran publication? No book can encourage killing other to protect its evil ideology. More than Five Billions people are non-Muslims. Muslims’ petro-dollars cannot buy freedom from freedom loving people of the world. Why should we fear Muslim countries to say the truth?

Thanks David revealing truth about Muhammad and his character to protect his fascist ideology in sixth century. He is the culprit of all present day’s killings by millions around the world in broad day light. Where should we hide our head with this shameless teaching of Quran?? It is better to die rather than to bow down to Muhammad’s fascist rule of sixth century.

i'm writing this everywhere since wednesday.
None muslims answered ^^

translation : Woe to the one who says something which is false in order to make people laugh! Woe to him, woe to him!
i don't find it in sunnah.com

Hi David. You should also take a look at the book, the sword against the one who insults the messenger, by Cheikh al Islam, ibn Taymmyah, that is precisely about this issue. In it he writes, "ANd there are a lot [of sayings] on the fact of killing the one who insults, before any agreement given by the imam, and this is [generally] a right reserved to the imam (the ruler), nontheless, the imam must be gracious towards the one who applied a compulsory sentence without his beforehand agreement"

Ah Osama Abdallah is silent... Would love to see his thoughts on this as to me it seems he's in a corner...

I just read this in my local paper, and I had to repost it here:

dj, I feel this website is rebuttal enough. Perhaps by asking David to rebut papers who publish these politically correct lies is a little too much, because there are so many of these papers everywhere around the world! What I do is just write to the editors of these publications, referring them to answeringmuslims or answering-islam, or any other website that exposes Islam for it really is. Normally these editors will not reply, but I don't care.

I suspect the guy killed his wife for some other reason but knowing the narcissistic personality of Mohammed, he made the excuse that his wife "disparaged" Mohammed.

Just out of curiosity, how would you respond to the claim that this hadith can also be translated to say that it was not right to kill her for what she did?

Who makes that claim, Brandon?

There are a few things to bring up. (1) You can ask him why the Arabic translators at Darussalam publishers botched the translation. (2) You can ask him why Muslim scholars quote this passage to show that those who mock Muhammad should be killed. For instance, the scholars at Islam QA quote this passage to show that critics are to be killed: http://islamqa.info/en/22809. (3) You can quote the very next hadith, in which another woman is killed for mocking Muhammad. (4) You can share the Ibn Ishaq passages and ask him if those are all mistranslated too.

Thanks! I shared this with my friend, including several articles from answering-islam to supplement point #4. I'll be interested to hear what he has to say.

I wonder about the second next hadith, which says: "I said: (I had said:) Permit me that I cut off his neck. He said: Would you do it if I ordered you? I said: Yes. He said: No, I swear by Allah, this is not allowed for any man after Muhammad."
So it seems that only Muhammad had the right to kill anyone insulting him, doesn't it? Or are there other hadiths that say otherwise?

(By the way I'm not a muslim and I usually agree with what you and Robert Spencer say about islam. I'm just trying to be fair.)

Laura, there have been some Muslim scholars who viewed that hadith in that manner, but that's not what it means.

On second thought, you're right, it doesn't say specifically that the guy insulted Muhammad. I was misled by the title of the chapter.
Darn. I like to play devil's advocate, and I'm really hoping to vindicate islam from an unfair accusation someday, but it's so hard...

:)
you have taken on an impossible task!

@ David Wood
The page: http://islamqa.info/en/22809, is no longer available, but I managed to save screenshots on my smartphone before it was made offline. LOL.

Thanks for sharing! The religion of peace named Islam is one among the mightiest religion in this world. And also the one that is misunderstood a lot for several reasons. Be it a propaganda of political or of economical unfolded at all times. Our mission is to spread truth about Islam by clearing entire misconceptions and to disseminate virtuous good deeds that the Muslims actually practice.
Truth About Islam
Truth About Muslims
Quran And Science
Muslims Are Not Terrorists
Islamic Sharia Law
Misconceptions About Islam
Why Wear Hijab
Women In Islam
Polygamy In Islam
the holy book of islam

It’s been Misconceptions About Islam and misunderstood by many that Islam was founded by Prophet Muhammed around 1400 years ago in the middle of Arabia and The holy book of Islam was certainly sent by Almighty.