Didn't anyone bother to tell the arsonists that Islam promotes open criticism and free speech, as politicians and the media insist? 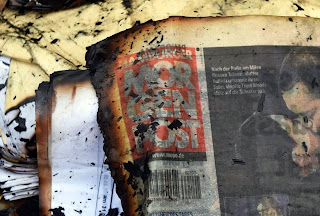 With security services on high alert after a killing spree in Paris by Islamic extremists, police in the northern German port city of Hamburg said no one was injured in the blaze at the headquarters of the regional daily Hamburger Morgenpost, which caused only slight damage.

"Rocks and then a burning object were thrown through the window," a police spokesman told AFP.

"Two rooms on lower floors were damaged but the fire was put out quickly."

The Hamburger Morgenpost, known locally as the MOPO, had splashed the Charlie Hebdo cartoons on its front page after the massacre at the Paris publication, running the headline "This much freedom must be possible!" (Continue Reading.)

Speaking about criticizing free speech: this is whats going on in Canada: http://toronto.ctvnews.ca/mobile/sentencing-delayed-in-case-of-toronto-man-convicted-of-promoting-hatred-1.1743492#

Here is the video link for the conversation that this man had that apparently got him in some hot water:

Looks like they are entering their third stage. Getting bold now.

Muslim prophet Muhammad should be charged spreading hate crime thru Quran ordering Muslims to kill Christians, Jews, Hindus, Buddhists, Sheiks, and other non-Muslims including atheists around the world. We have right to defend ourselves by pen, by cartoon to bring light to dark world. Quran cannot inspire people to kill those who talk against its hatful preaching. All religion must have limit to enjoy freedom of religion, Muslims crossed the boundary.

Somebody should file a case in The International Court of Justice, the Hague, Netherlands and seek justice for thousands innocent lives lost due to inspiration from Quran, including teenage school girl Malala of Pakistan.