Muhammad Orders the Execution of Critics

When Muhammad entered Mecca, he ordered his followers only to fight those who refused to surrender to him, except certain people who were to be executed whether they surrendered or not. In our earliest detailed biographical source on the fall of Mecca, Ibn Ishaq lists eight people who were to receive the death penalty. The charges against four of the eight were "insulting Muhammad." One of the four critics was eventually pardoned; the others were killed.

Politicians, the media, and Muslim groups assure us that Muhammad never retaliated against people who insulted him. Too bad these modern apologists weren't there to tell Muhammad how tolerant they would one day imagine him to be.

Here's the passage from Ibn Ishaq, with details on the critics underlined. Pass it on. 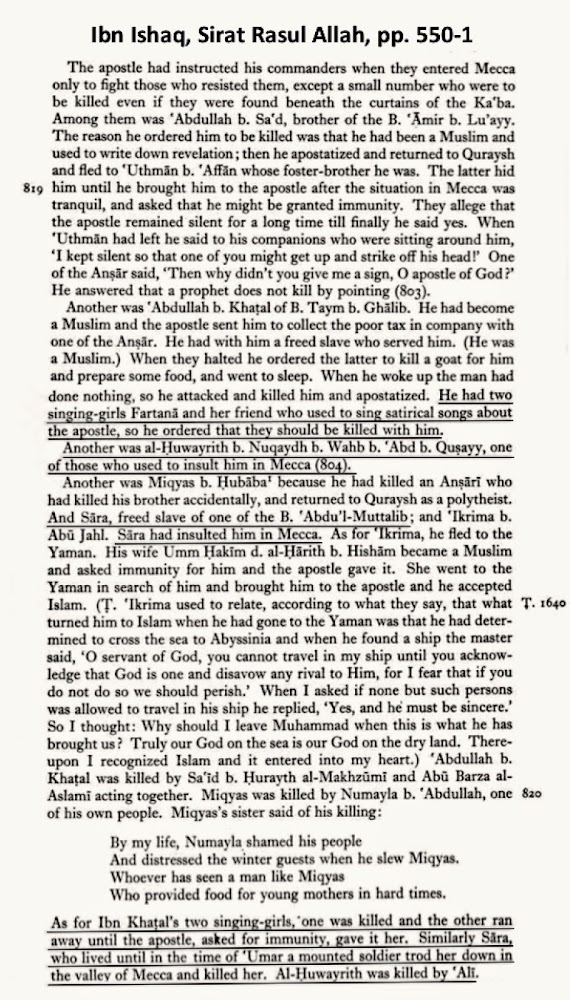 "Politicians, the media, and Muslim groups assure us that Muhammad never teliated..."

There's a very eerie silence out there around the subject of Islamic ideologies and history (your website excluded!) which I think is far more than just the usual apathy that people have towards religion.

We can certainly talk about the horrific acts of terror and how much we need to improve security, but discussions on the Islamic doctrines that propagate these acts is increasingly becoming a no go zone.

I noticed yesterday while discussing the events with some friends that everyone was reluctant to speak negatively about Islam. Even those who I know believe it to be a dangerous ideology. In fact, one member of our group kept lowering her voice when she said the word "Islam".

I live in Australia, where religion is generally used for verbal duck shooting on a regular basis. Islam, however, has all of a sudden become a protected species.

It reminded me of what I read once about domestic violence victims, that they keep silence for fear of upsetting their abusers and incurring more punishment. Violent and abusive people understand this human reaction all too well, and rely on it to gain power. Islam has depended on this human reaction to establish itself throughout the world.

How many people in society, I wonder, are refusing to speak out, ask questions, or re-post information because they are afraid of what might happen to them?

I encourage anyone reading this comment to speak up when you have the opportunity, or better still make your own opportunity. God has got your back! As Arthur Mattews wrote, we don't pray FOR victory, we pray FROM a place of victory.

The world's only hope in the midst of this nightmare is God, and we, as Christians, are the ones charged with being a city set on a hill, a place where people, Muslims included, can find hope and healing.

Let's pray for ministries like this one and for each other. There are people out there who need to hear the truth, boldly and in love.

God's perfect love casts out all fear. Be strong guys!

nice one DAvide, Where can i get this online?

Paige, I'm with you. A few months ago, a friend of mine was saying that those people who left their homes to join ISIS surely have some form of personal issues in their lives which are unresolved and they are unsatisfied, looking for something to fill the void. So Islam was just an excuse he said. Sure, be that as it may, my question to this rationalisation would be, why are so many then using Islam as an "excuse"? Is there something IN Islam itself that is making it the easy target for a therapy of violence? There is no running away from the fact that Islam is the common factor in these terrorist acts. If I were a detective, surely I would be suspecting there is something more sinister afoot.

The terrorists did not corrupt Islam. They followed Islam to the core. It is Islam who has corrupted them.

@minicapt thank you a lot

Dear David,
I pity your knowledge and seek Allah's refuge from your wickedness,Please re look at history when a winning army of ten thousand (10000) has entered a city without any bloodshed and the killing you are referring were due to their act against prophet of God,you people definitely does not know the value and status of Prophet as some of you killed them remaining abundund their teachings.
Ponder over Words of conqueror :
'Whoever enters the house of Abu Sufyan is safe. Whoever locks his door is safe. Whoever enters the mosque is safe.'

The Messenger(sallallahu alaiyhi wassallam) of Allah told his army not to use arms against anyone when they entered Makkah unless they met opposition or resistance.

He directed the army not to touch property or possessions belonging to the people of Makkah and nothing should be destroyed .

'Today is a day of mercy and forgiveness when Allah will exalt the Quraysh and raise honour for the Ka'bah.'

Thank you for posting your comment. Your argument is very familiar to both Muslims and non-Muslims, that is, that you point to the fact that Islam spread through warfare and conquest in which people's deaths were the result of their refusal to obey the commands of Islamic conquerors. You have, of course, merely described the rationale that all despots use, that is, "we will not kill you as long as you obey us". Whether it was the Mongols, Alexander the Great, Mussolini or Stalin, the same words were always used....Obey or die!

To argue that Muslims only killed those who did not obey them, puts them on the same level as all the other despots and ruthless conquerors the world has had to endure.

If you want to claim that Islam is right, you must first put down your sword not merely choose not to use it. Sadly you cannot, for the sword and Islam cannot be separated. It would be like taking the engine out of a car and believing that it could still drive.