CAIR's ties to the Muslim Brotherhood and Hamas are too much for the United Arab Emirates to ignore. Thus, UAE has designated CAIR (the Council on American-Islamic Relations) a terrorist group. Meanwhile, politicians and the media in the U.S. continue to grovel before CAIR, going so far as to help CAIR and its Muslim Brotherhood-linked associates hold a prayer service at the National Cathedral. 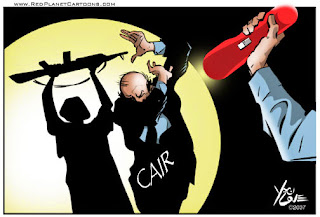 Associated Press—The United Arab Emirates designated the Muslim Brotherhood and dozens of other Islamist groups as terrorist organizations on Saturday, ratcheting up the pressure on the group by lumping it together with extremists such as the Islamic State group and the Nusra Front, al-Qaida's affiliate in Syria.

The federation's Cabinet adopted the designations against the 83 groups, the official state news agency WAM said. They include Al-Islah, an Emirati group suspected of ties to the Brotherhood whose members have faced prosecution in the seven-state federation, which includes the cosmopolitan business hub of Dubai and the capital of Abu Dhabi.

The move follows a decision by Saudi Arabia in March to designate the Brotherhood a terrorist group along with al-Qaida and others. The Emirates voiced support for the decision at the time, and accuses Islamist groups of trying to topple its Western-backed ruling system.

Saudi Arabia and the Emirates have taken a firm stance against the Brotherhood since its ascendance in Egypt in the wake of the Arab Spring, and the oil-rich Gulf neighbors are strong supporters of Egyptian President Abdel-Fattah el-Sissi. He was elected earlier this year after leading the military overthrow of Islamist President Mohammed Morsi.

Egypt labeled the 86-year-old Brotherhood a terrorist organization in December.

The Emirates, Saudi Arabia and the kingdom of Bahrain earlier this year recalled their ambassadors from fellow Gulf state Qatar to protest what they say as its failure to stop meddling in other nation's affairs and for backing groups that threaten the regional stability. Analysts widely saw that as a swipe at Qatar's perceived support for the Brotherhood and other Islamist groups.

The Emirates list includes the Islamic State group it is helping to bomb as part of U.S.-led airstrikes in Iraq and Syria. Among the other groups targeted are the Pakistani Taliban and the Yemeni Shiite rebels known as Houthis.

Also on the list are a number of Western Islamic organizations, including the Council on American-Islamic Relations, the United States' largest Muslim civil liberties group. (Continue Reading.)

For more on CAIR, watch this:

Abomination that makes desolate in America. This is shocking and unbelievable. Will the real followers of Christ stand up.
http://www.wnd.com/2014/11/christian-booted-from-national-cathedral-speaks-out/?cat_orig=faith

Totally unacceptble conduct by this so called ministers. Allowing a church to be used as a mosque just to show how tolerant you are. Why not try and use the mosque as a church and see what reaction you'll get from the so called religion of peace. Its indeed an abomination.

Saw that. Made my blood boil. Turning their backs on the Cross? What the f*ck are they doing in the church then?!!! And these so-called church people who allowed such a thing to happen! We are praying to the same God?? No, we're not! America must remove Obama.

Now let Muslims show the same tolerance and let us pray in majid-e-nabawi!
Oh wait I as a Christian can't even go inside the city let alone the mosque. I was reading a Pakistani news paper yesterday and the headline was "allah-hu-akbar, first step towards sharia law in America".
If that doesn't scare Americans than I guess adult circumcision should because that's what majority of American would be having when Islam takes over.