The Islamic State has beheaded U.S. aid worker Peter Kassig. Our leaders and the media will use this beheading as an opportunity to remind us that Islam is a wonderful religion. The more violence and terrorism ISIS commits, the more President Obama and Prime Minister Cameron praise Islam. 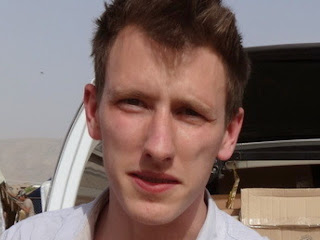 RT—Islamic State militants have beheaded US aid worker Peter Kassig even though he converted to Islam, a video posted on social media shows.

After conversion during captivity, Kassig took the name Abdul-Rahman.

Kassig, 26, was captured on October 1, 2013, by Islamic State (formerly ISIS/ISIL) militants. He had served in Iraq before becoming a medical technician. In May 2012, he travelled to Lebanon where he volunteered in hospitals.

His parents, Ed and Paula Kassig from Indiana, recorded a video message in May 2014 appealing for their son’s release.

“As Muslims around the world, including our son Abdul-Rahman Kassig, celebrate Eid al-Adha, the faith and sacrifice of Ibrahim, and the mercy of Allah, we appeal to those holding our son to show the same mercy and set him free,” they said in a statement.

Islamic State militants first showed him in the video of the beheading of UK aid worker Alan Henning, who shared a prison cell with Kassig. After Jihadi John, an IS executioner with a London accent, killed Henning, he also threatened Kassig would be next. (Continue Reading.)

For more on ISIS, watch this:

Poor guy. I wonder if his conversion to Islam was from the heart, or merely an expediency to increase his survival chances.

Being a Christian, I hope I would be given the grace necessary for remaining true to Christ if I ever stumbled into such a situation.

I am so, so sorry for the family, no one can fathom their pain & sorrow!

To all life loving humans:
"Does satan/evil have any compassion"?

ISIS has justified their actions based on the koran/islamic theology!

Damned they've beheaded a "new" muslim, so they 'can"t be muslims (#notinmyname futur speech)but they considered him as a hypocrit ^^ (futur david wood speech)

Seems they weren't too merciful to this Islamic convert!

“UK PM David Cameron said he is “horrified” by the murder of Kassig”. But still he and President Obama fall short declaring Islam a religion of horrible DEVIL, like Ebola and must be irradiated from the face of earth once for all like EBOLA. How many more innocent blood western world needs to watch to declare WAR against a religion of terrorism?

May Almighty God save His beloved world from bondage of Islamic DEVIL by His mighty power, as He did to conquer death by raising Jesus Christ from His grave three days after Jesus Christ’s crucifixion!

Am not getting it. He converted to Islam and still got his head chopp off with off. This is a warning sign to anybody that thinks s/he can get the mercy of this terrorists by converting to Islam.

Am sad he lost his life as a muslim not as a jihadist but as an infidel/moderate because ISIS still consider him to be in one of this two group.

Maybe he converted to Isam so he can be able to get through to those people in need. I just don't know what I can think of his death. #RIP

a message to the civilized societies:http://www.therazor.org/images/realistic_coexist.jpg

beheading doesn't even happen in movies...i hope this evil religion comes to an end by the grace of Jesus Christ really soon... sorry for he's family.

Smalltallest said: "Am not getting it. He converted to Islam and still got his head chopp off with off. This is a warning sign to anybody that thinks s/he can get the mercy of this terrorists by converting to Islam."

Kassig was a U.S. Army Ranger stationed in Iraq. That's a death sentence in Islam, and converting after being captured doesn't necessarily result in a pardon.

So glad the millions of muslims around the world are finally going to protest against these violent attrocities.

They never protect when there is a beheading, child rapes, mass extermination, mutilations, etc. They only protest when someone burns their "holy" book, or draws a cartoon, or when a logo somehow looks like mohammad.

May his soul rest in peace.
I pray also for all the people committing these atrocities too that their eyes will be opened to know Jesus Christ and accept Him as Lord.
The bible says : We wrestle not against flesh and blood, but againt spritual wickedness in heavenly places..............
Jesus Christ is the only Answer.

Quick question. I've just started reading the Koran. I have the NJ Dagwood translation. And the question I have is about the use of "we". Muslims are strictly monotheistic. However, in chapter 2 it starts by talking about "what We gave them." Later, around verse 23, it says "If you doubt what We have revealed to Our servant."

I flipped ahead and found more usages of this "We."

How do Muslims explain this?

Is it similar to how Christians explain the usage of the plural of El or Eloah in Genesis? Do you have any info on this?

John Brown
I notice this "we" so much in th Quran. I think when the word "we" is use in the quran to refer to conversation between Muhammad and the angels.

This is my problem with Muslims, they want us to believe that every word in the Quran are words of Allah and that you can't find any spoken words by Muhammad and any other being in the Quran. I pose Surah 66 to a friend that he should read that chapter vry clearly. Am sure by the time he finish reading that chapter, he will know certainly well that we even have words of one of Muhammad's wife in that chapter.

I get it, he converts, has questions, the Muslims always believed he was apostate anyway, and chop his head off. Make perfect sense to me. It's a lose lose situation no matter how you look at it.

Is there a transcript of the video online somewhere? Arabic would be fine. Do they give any specifics about why they are killing Kassig the individual? That is, do they mention his Iraq service or any other particulars about him? Or was he executed merely because he is an American? I'm interested in what they said, not in what others' opinions or inferences might be.

it seems that David Wood has a better understanding of Islam than most of the Muslims who don't read the scriptures. learned many things from you. Thank you.

''Poor guy. I wonder if his conversion to Islam was from the heart, or merely an expediency to increase his survival chances.''

I don't want to sound heartless but the guy sealed his fate when he denied Christ regardless whether it was genuine conversion or just pretending in order to save his own life. The latter maybe justified in the in Islam, but Christ said those who deny him even in the face of death, he too will deny them in front of the Father come Judgment day

Assyria_Lost, I respectfully dissent. God will accept sincere repentance even at the last. The thief crucified along with Jesus was saved in the last hours of his life. Many martyrs under the Ottomans made coerced or ill-considered submissions to Islam and then repented and were martyred as Christians. We don't know details about what happened to Kassig and what he did; and, what really matters, only God knows what was in Kassig's heart.

There are no parallels between the crucified thief and Kassig, the thief never denied or rejected Christ and was self-repentant and had faith. Whereas Kassig denied and reinforced his rejection by changing his name.

To be fair we don't know what really happened during his execution, I could only speculate as to why we were only shown the aftermath in contrast to other Hollywood-style mass execution of Syrian captives, maybe out of respect and to spare his parents the anguish perhaps. I remain pessimistic.

Just for everyone's general information, just after the year 300 there was a great persecution of Christians. Many Christians implicitly or explicitly denied Christ. After the persecution there was a great debate as to whether those people could again become part of the church or had broken irrevocably with Christ and lost salvation. The unified church of that time decided those people could repent and be restored to the church; they had not sealed their fates and lost salvation. A significant part of the church in North Africa took the opposite position and broke away. They were called "Donatists" and the church proclaimed them to be a heretical sect. In councils over the years the church specified in detail the rules and methods for receiving (back) into the church adherents of various heresies; it did not exclude sincerely repentant people no matter what they had previously publicly affirmed or denied. I think I have summarized this history correctly; anyone, please correct me if I have not.

am a muslim. you are definitely correct about everything you said. unfortunately, your understanding would be lacking if you only rely on the literal, albeit clear, verses of the quran. you can try reading sayyid qutb's interpretation of all the verses you mentioned (and all the verses of the holy quran for that matter) in his book(s) entitled "In the Shade of the Quran"}. You can also try reading his "Milestones". Honestly, if you will continue presenting the divine book contrary to what the author, Allah, intends it to be, i will not mind killing you myself.

Gerry Fuentes, by killing him you would only being proving us non-muslims right when we say that islam teaches violence