If you live and work in the U.S., your tax dollars were spent on bullets and weapons that are now being used by ISIS to murder Shias, Kurds, and Christians. 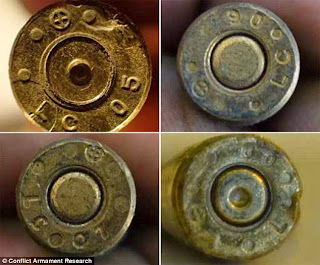 Daily Mail—Islamic State militants are using huge numbers of U.S.-made bullets to maim and kill innocent victims across Iraq and Syria, a new survey has revealed.

A study of more than 1,700 shells fired by ISIS in the Kurdish regions of the two countries found that 20 per cent were manufactured in America.

Only ammunition from the former Soviet Union and China were found in greater numbers in a list of 21 countries ranging from Serbia and Romania to North Korea and Sudan.

In the case of the United States, much of the ammunition was likely seized when the jihadists sent Iraqi forces fleeing during its lightning uprising in June.

The report found that many of the 323 U.S.-made cartridges were manufactured between 2000 and 2010 - a period when America was arming the Iraqi army following the second Gulf War. (Continue Reading.)