Mohammed Hamzah Khan was terrified of paying taxes to the U.S. government, because tax money is used to support the military, and the military is dropping bombs on ISIS jihadists. According to the Qur'an (5:33), the penalty for "making mischief" in a Muslim land is death, dismemberment, crucifixion, or exile (depending on the severity of the "mischief"), followed by an eternity in hell. Needless to say, the penalty for dropping bombs on a Muslim country would be pretty harsh.

According to Muhammad, however, those who fund a military are equally responsible for the actions of the military (see Sahih al-Bukhari 2843 and Sunan Ibn Majah 2759). So anyone who pays taxes to a government that is fighting in a Muslim country is guilty of killing Muslims. This was the same reasoning used by al-Qaeda to justify attacks against civilians. Since civilians pay taxes to governments that are sending troops to fight in Muslim lands, the civilians are to receive the same penalty as the troops.


CHICAGO (AP) — An American teenager who expressed disgust with Western society was arrested at a Chicago airport, from where he intended to travel to Turkey so that he could sneak into Syria to join the Islamic State group, according to criminal complaint released Monday.

Members of the FBI's Joint Terrorism Task Force arrested Mohammed Hamzah Khan, a 19-year-old U.S. citizen from Bolingbrook, on Saturday at O'Hare International Airport. Khan is charged with attempting to provide material support to a foreign terrorist organization, and a federal judge has ordered him held until a detention hearing Thursday.

On Monday, the slight, bearded Khan appeared in a federal court in orange jail clothes, calmly telling the federal magistrate that he understood the allegations. Later, as marshals were leading him away in handcuffs, he turned to smile at his parents at the back of the room.

There are about 12 Americans believed to be fighting in Syria right now, FBI Director James Comey said two weeks ago. There are more than 100 Americans who have either tried to go to Syria and were arrested, or went and came back to the U.S., Comey said, without offering more details. 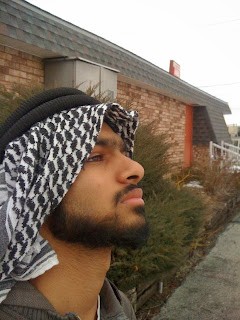 According to prosecutors, Khan was trying to fly to Istanbul by way of Vienna when customs officers stopped him while he was going through security at O'Hare's international terminal. While FBI agents interviewed him there, others executed a search warrant at Khan's home and found documents he wrote expressing support for the Islamic State group.

One page in a notebook had a drawing of what appeared to be an armed fighter with an Islamic State group flag and the words "Come to Jihad" written in Arabic, according to the criminal complaint.

Agents also found a handwritten three-page letter from Khan to his parents in which he informs them he was on his way to Syria and the Islamic State, saying he was upset his U.S. taxes were going to kill his "Muslim brothers and sisters," the complaint says.

"We are all witness that the western societies are getting more immoral day by day," the letter says. "I do not want my kids being exposed to filth like this." He also invites his parents to join him one day. (Continue Reading.)

Why prevent him from leaving? let him leave WITHOUT U.S. Passport and revoke his citizenship. Therefore he will become an enemy of the U.S. and the civilized world.

Let me make this straight.
Faithful Muslim = Terrorist
No separation between these two things. These are just two faces of one coin.
If anyone does not like the US, just leave it and go live in a country like Saudi Arabia, Iran, or Pakistan. Why do you live here? This is very Ironic. Muslim immigrants hate US, burn the American flag, but still they want to live here.
Strict law is needed at this point, any immigrant 1st or 2nd generation has any intention to harm the US or its citizens will be SHIPPED BACK to his country. If you hate freedom of the US and its democracy, if you love the slavery of Islam, go live in an Islamic country.
Wake up Americans, your freedom and democracy will be replaced by slavery of Islam.

Akariey I agree. Was watching this on CNN and one of the talking heads said words to the effect of.

Yah great keep them Jihadist here in the US. Great thinking idiot

From the article: “Since civilians pay taxes to governments that are sending troops to fight in Muslim lands, the civilians are to receive the same penalty as the troops.”

So the civilian is being punished for obeying the true God, the God of the Bible, whose written word existed long before the blasphemous Muhammad and his Koran?

God Himself says we must pay taxes to maintain the earthly government that He has instituted (Romans 13:1-7, Luke 20:22-25).

How is Muhammad going to talk his way out of this on the Last Day/Judgment Day, before his Creator and Judge, Christ Almighty? (Matthew 28:18, 2 Timothy 4:1, 1 Peter 4:5)

I find it amazing how all of my "educated" friends say that terrorism is a direct result of poverty and poor education...

How does that work when you have wealthy, highly educated countries like ours, london, australia, and sweden, producing people who we would have labeled as "Peaceful Muslims", who want to join ISIS?

Money doesn't seem to be a factor in these cases. They always seem to have plenty of money for airline tickets to turkey.... or do they just need to read a DIFFERENT book???

The logic falls in on itself..

I agree with akairey, let him go and others like him. Revoke his American passport. In fact, I would have paid his way to get rid of him. Stop calling him an "American teen". He's NOt!

The poor misguided parents! They are reaping what they have sown.

But I don't think they have to worry too much. I suspect this young man will only get a slap on the wrist.

I agree with the other comments here. His citizenship and US passport should be taken away and he should make his new home in ISIS territory. And I wouldn't be upset if his parents joined him there.

This is the absolutely very first time I see right here. I placed many satisfying things on your blog site, especially its conversation. From the deals of reviewing your fast evaluations, I think I am not the just one having all the pleasure below! Maintain the amazing.
123.hp.com are the 24/7 helpline provider they provide the best solutions regarding the issues of Hp PRINTER.