When I point out that the Qur'an promotes the sort of violence and oppression we're seeing from the Islamic State, Boko Haram, al-Shabaab, al-Qaeda, and the Taliban, I'm called a racist, a bigot, a hate-monger, and, of course, an Islamophobe.

But what happens when a Westernized Muslim admits that the Qur'an, without reinterpretation by modern reformers, supports ISIS?

Maajid Nawaz is a British politician and chairman of the Quilliam Foundation (a "counter-extremism" think-tank). Nawaz acknowledges that "ISIS-style slavery, beheading, lashing, amputation and other medieval practices" are all found in the Qur'an, but he maintains that reformers must reinterpret such Qur'anic teachings or face "an ISIL-style theocracy." 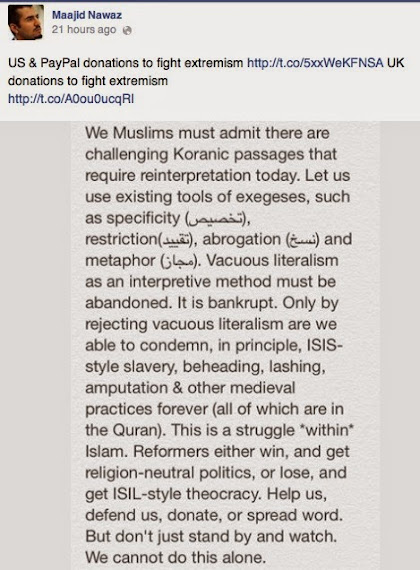 Unfortunately for readers who think Nawaz is on the right track in his attempt to reform Islam, the Qur'an doesn't allow such reinterpretation.

According to the Qur'an, Muslims can have no real faith until they make Muhammad judge in all disputes and have no resistance against his decisions:


Qur'an 4:65—But no, by your Lord, they can have no Faith, until they make you (O Muhammad) judge in all disputes between them, and find in themselves no resistance against your decisions, and accept (them) with full submission.

The Qur'an also declares that true believers have no option except complete obedience to the commands of Allah and Muhammad:

Since reinterpreting the decisions and commands of Allah and Muhammad are ruled out by the Qur'an itself, no one who sincerely submits to Allah can ever accept the reinterpretations of Westernized Muslims like Maajid Nawaz. The only outcome of true submission to Allah is, as Nawaz puts it, an "ISIL-style theocracy."

For a brief introduction to some Islamic teachings that Nawaz would like to reinterpret, watch this:

Is our President Obama a graduate from Harvard? It is hard to believe that a Harvard graduate find it difficult understanding a book that spreads violence, hatred and religious intolerance. Quran is a book of terrorism, its Allah advised his prophet Muhamad to be hard against those who do not believe Allah and his prophet Muhammad and their violent path to be in heaven. In no way one can interpret this word of intolerance positive way for non-Muslims. To find truth about Quran please watch this video and other videos that David presented. Thanks David for informative videos.

President Obama is not licensed to lie about Quran presenting Quran a book of peace and religious tolerance for political purpose. Truth and political correctness are two different issues. A truth cannot be covered for political correctness. Arab may be oil rich and there may be 1 billion people Muslims that does not mean we have to bow down our freedom to message of terrorism come out of Quran and praise them as religion of peace to please Arabian petro dollars.

It is not difficult to understand what Islam is when their holy Quran says to fight those who do not believe Allah and his prophet Muhammad. Good thing about Quran is that it allows multiple marriages for its followers and allows killing by “Allah-hu-Agbar to full fill ones objectives. All sins would be forgiven if you are a Muslims. What a great religion Islam is!

To 'reform' means to get back to the original true meaning of the text, which is exactly what ISIS have done. ISIS are the true reformers spearheading the Islamic reformation to get it back to what it originally was in Muhammad's time, by also strictly adhering to all the Quran's violent passages. So there can be no trying to deny that the Quran and Islam comes from the devil.

Maajid, I hope you're reading this. I have noticed you sporadically on the Internet since you teamed up to debate against Hirsi Ali and Douglas Murray on whether Islam is a religion of peace, and because you acknowledge the problems, both then and now, I really respect you.

I would ask that you read Nabeel Qureshi's book Seeking Allah, Finding Jesus, and pray to God and ask Him to reveal his true nature to you. I understand that for a Muslim to leave his religion and become a Christian could go to the very depths of his identity, and affect his closest relationships.

But, Maajid, I hope you will embark on this adventure and I wish you the inner strength for doing it.

We should all read Quran and know what it contains. Quran is here www.clearquran.com

I share Ignatius' sentiment. No apparent reason to me why Maajid is still a Muslim.


Whoso is wont to think (through envy) that Allah will not give him (Muhammad) victory in the world and the Hereafter (and is enraged at the thought of his victory), let him stretch a rope up to the roof (of his dwelling), and let him hang himself. Then let him see whether his strategy dispelleth that whereat he rageth!.
Qur'an 22:15

The confused Muslim needs to add little item to his shopping list.

Maajid Nawaz should turn to Christ for divine aid.