John Cantlie is a British photographer who was captured by British jihadists in Syria nearly two years ago. He is now making propaganda videos for the Islamic State (ISIS). "Lend Me Your Ears," the first video in the series, was released today.

Here's more on the story from Reuters: 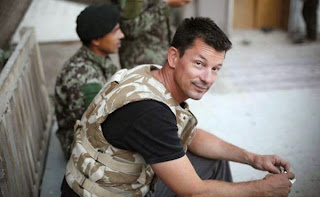 BEIRUT, Sept 18 (Reuters) - Islamic State militants fighting in Iraq and Syria released a video on Thursday that they said shows British journalist John Cantlie in captivity saying he will soon reveal "facts" about the group to counter its portrayal in Western media.

The Islamic State, which controls territory in Syria and Iraq, has already beheaded two American journalists and one British aid worker in recent weeks in what it said was reprisal for U.S. air strikes against it in Iraq.

But in the new roughly three-minute video posted on social media sites, the man identified as Cantlie appears in good health and promises to "convey some facts" in a series of "programs," suggesting there would be further installments.

"Now, I know what you're thinking. You're thinking, 'He's only doing this because he's a prisoner. He's got a gun at his head and he's being forced to do this.' Right?" the man in the video, wearing an orange shirt and closely-cropped hair, says.

"Well, it's true. I am a prisoner. That I cannot deny. But seeing as I've been abandoned by my government and my fate now lies in the hands of the Islamic State, I have nothing to lose."

British Foreign Secretary Philip Hammond said he had heard reports of a video on social media and said authorities would look closely at any material released online.

"These videos can be very distressing for the families of the individuals involved," he told reporters during a visit to Copenhagen.

U.S. President Barack Obama has been trying to build an international coalition to destroy Islamic State, a Sunni Muslim extremist group which has exploited the chaos of Syria and Iraq to seize swathes of territory in both countries.

The United States has already carried out scores of air strikes against the group in Iraq and Obama said in a policy speech he would not hesitate to strike it in Syria as well. (Continue Reading.)

sadly; he is a dead man talking

He has no shame. Be a man and die with honor.