While the world is focused on the atrocities being committed by ISIS, human rights abuses continue unchecked in other Muslim countries.

Several months ago, some Iranians made their own music video for Pharrell Williams's "Happy":


When the Iranian authorities found out about the video, they moved into action and arrested the dancers. Following an international outcry, the dancers were released, and the world went back to sleep. But the dancers still had to go to court, where they were convicted and sentenced to lashes and jail time. The sentences have apparently been suspended.


Fox News—Iran's latest crackdown on freedom includes lashes and prison for seven young adults who posted a video of themselves dancing to the American pop hit "Happy" and a death sentence for a blogger accused of insulting Prophet Muhammad.

The seven men and women were arrested in May, but then released after self-professed "moderate" President Hassan Rouhani tweeted that the regime should lighten up. But the group was forced nonetheless to apologize on television and endure a trial in which they were convicted and each sentenced to 91 lashes. One was given a full year in prison while the others got six months, although their attorney told Iranwire.com the sentences were suspended.

“A suspended sentence becomes null and void after a certain period of time,” attorney Farshid Rofugaran said. For the Happy Group, that period will be three years. “When it’s a suspended sentence, the verdict is not carried out, but if during this period a similar offense is committed, then the accused is subject to legal punishment and the suspended sentence will then be carried out as well.”

The video was part of a global campaign launched by pop star Pharrell Williams and was viewed by more than 100,000 people on YouTube. The six who appeared on the video and a man who shot the footage apologized and said they had been tricked into doing it. After the confession, they were released on bail.

“We can accept the verdict or appeal,” said Rofugaran, adding that his clients are not banned from leaving the country. (Continue Reading.)

To his credit, Pharrell spoke out in defense of the Iranian dancers: 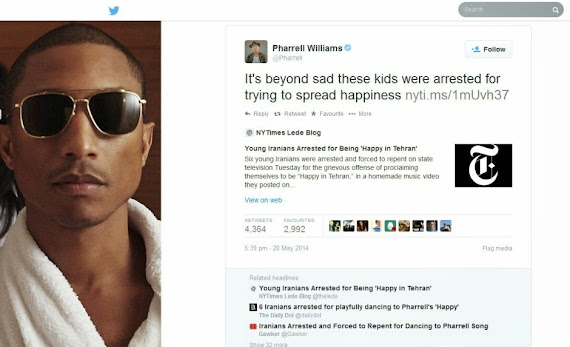 They caused Fitna in the Ummah

That is all what they think

They definitely not a "Happy" Ummah

They are nuts dancing "Happy" in UnHappy nation of Islam

That will teach them not to be Happy