Of course, the Australian government (like the U.S. government and the British government) will continue to defend and promote the ideology that gives rise to such terror plots, so the Aussie police are going to have their hands full for quite some time. 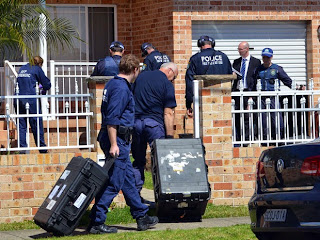 Fox News—Australian counterterrorism forces detained 15 people Thursday in a series of suburban raids after receiving intelligence that the Islamic State movement was planning public beheadings in two Australian cities to demonstrate its reach.

About 800 federal and state police officers raided more than a dozen properties across 12 Sydney suburbs as part of the operation -- the largest in Australian history, Australian Federal Police Deputy Commissioner Andrew Colvin told the Associated Press. Separate raids in the eastern cities of Brisbane and Logan were also conducted.

The Australian Broadcasting Corporation reported that the plan involved kidnapping randomly selected members of the public off the streets in Sydney and Brisbane, beheading them on camera, and releasing the recordings through Islamic State's propaganda arm in the Middle East.

Police allege that orders for the attacks came from Mohammad Ali Baryalei, a 33-year-old former Sydney nightclub bouncer who is believed to be the highest-ranking Australian in Islamic State, also known as ISIS. A 22-year-old Sydney man, Omarjan Azari, appeared in court Thursday and is accused of conspiring with Baryalei and others to act in preparation for or plan a terrorist act or acts.

Prosecutor Michael Allnutt said he was involved in a "plan to commit extremely serious offenses" that was "clearly designed to shock and horrify" the public. It is not immediately clear what sentence Azari faces if convicted. The accused did not apply for bail and did not enter a plea. His next court appearance was set for November 13. (Continue Reading.)

This can happen everywhere. It can happen in the US as well.
All Christians need to pray that the Lord Jesus Christ send mercy and peace on earth and come soon. I am praying that the faith of those who are persecuted for His name’s sake not to be weakened.
I am praying for your safety David.