***UPDATE*** Gourdel has been beheaded.

Jihadists in completely different parts of the world are now taking orders from the Islamic State (ISIS). In response to a recent ISIS call to take hostages, the terrorist group Jund al-Khilifa kidnapped Frenchman Herve Pierre Gourdel in Algeria. Gourdel is set to be executed in 24 hours unless France ceases airstrikes against ISIS.

I have a sinking feeling that our government's only response will be to defend Islam. 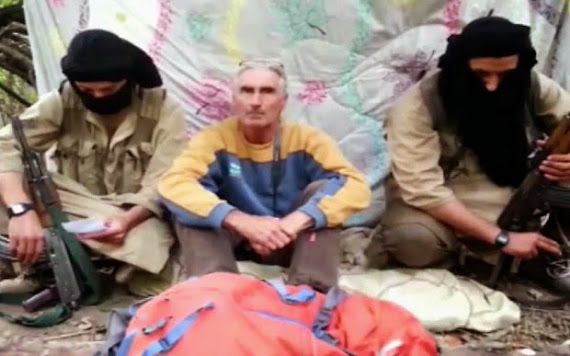 Telegraph—An Algerian group linked to Islamic State jihadists has threatened to kill a French hostage within 24 hours unless Paris halts air strikes on the IS in Iraq in a video released on Monday evening.

Jund al-Khilifa (Soldiers of the Caliphate), which has pledged allegiance to IS, said in the video that it carried out a kidnapping on Sunday of a Frenchman in a mountainous region of eastern Algeria.

"It is up to Hollande, president of the criminal French state, to halt the attacks on the Islamic State within 24 hours of this statement, otherwise his national Herve Gourdel will have his throat slit," one of his kidnappers says in the video.

Gourdel said in the video he is a native of Nice in southern France who works as a mountain guide, and that he only arrived in Algeria on Saturday. He was seized while hiking with Algerian friends.

In the video, the kidnappers said they are responding to a call from IS, posted just hours earlier, for Muslims to kill citizens of countries taking part in the US-led coalition against the jihadists who have seized of large swathes of Iraq and Syria.

"If you can kill a disbelieving American or European - especially the spiteful and filthy French - or an Australian, or a Canadian or any other disbeliever... including the citizens of the countries that entered into a coalition against the Islamic State, then rely upon Allah, and kill him," said IS spokesman Abu Mohammed al-Adnani.

"Kill the disbeliever whether he is civilian or military," he said in the message, which was released in multiple languages. (Continue Reading.)

For a brief introduction to Islam's teachings about non-Muslims, watch this:

"If you can kill a disbelieving American or European - especially the spiteful and filthy French - or an Australian, or a Canadian or any other disbeliever... including the citizens of the countries that entered into a coalition against the Islamic State, then rely upon Allah, and kill him," said IS spokesman Abu Mohammed al-Adnani."

Another murderer speaking in the name of his pagan god, Satan.

No one should mind being called a "disbeliever" in the Islamic god, since that is a good thing.

Better to believe in the true God, who is Christ, and get salvation.

Beware of misusing the word "execute".
The subject is murder.

update:
they did it. rip Herve.
may they burn in hell for it...

Ibrahim ibn Awwad ibn Ibrahim ibn Ali ibn Muhammad al-Badri al-Samarrai, is the leader of ISIS. He is also known as Abu Bakr al-Baghdadi. My opinion is that this person is the Mahdi (Muh-di) - Muh-ammad al-Baghda-di.