French hostage Herve Pierre Gourdel has been beheaded by a jihadist group that has pledged allegiance to the Islamic State. Meanwhile, Western politicians and the media will respond to the beheading by defending the ideology that promotes such beheadings. 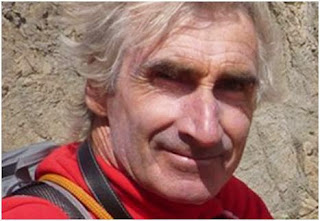 "You will understand that today I am speaking before you with a particularly high level of emotion because one of my compatriots has just been subject of a cowardly assassination," Hollande said. "He was a man who was full enthusiasm. He loved the mountains. He thought he would be able to pursue his passion moving into the Ouzou area in Algeria."

Hollande said the attack won't affect France's role in the battle against terrorism.

"France will never give in to blackmail, to pressure, to barbaric acts. Quite to the contrary, France knows what is expected," Hollande said.

Earlier, Hollande expressed his condolences to Gourdel's family in a news conference at the French mission.

Gourdel was kidnapped over the weekend in Algeria's Tizi Ouzou region east of Algiers, the French Foreign Ministry said. The video was posted online Wednesday. It shows armed men who claim to belong to Islamist militant group Jund al-Khilafa -- or Soldiers of the Caliphate -- in Algeria. They pledge allegiance to Abu Bakr al-Baghdadi, the leader of the Islamic State in Iraq and Syria. (Continue Reading.)

May we always remember his sacrifice and may he rest in peace.

It is sad to say that so much blood has been flown around the world since September 11, 2001 till today by the name of Islam and there is no sign to stop. After so many innocent souls have been lost prematurely does it make sense to say Islam is religion of Peace and point finger to few terrorists responsible for such huge crime against humanity by the name of Islam and majority Muslims are innocent?

Muslim’s holy book the Quran says in Surah 9:29 “Fight those who do not believe in Allah or in the Last Day and who do not consider unlawful what Allah and His Messenger have made unlawful and who do not adopt the religion of truth from those who were given the Scripture - [fight] until they give the jizyah willingly while they are humbled”.

In Surah 9:73 the Quran says “O Prophet, fight against the disbelievers and the hypocrites and be harsh upon them. And their refuge is Hell, and wretched is the destination”. There are many more Sutras in Quran that speaks hates against Christian, Jews and non-Muslims.

It is unlike Christ’s overall teaching that love your neighbor as yourself. Are ISIS, Al-Qaeda, Boko-Haram etc. violating the Quran, Hadith and the Sharia?

To get permanent solution for peace we must know the truth and find path accordingly to set us free from evils’ claw as Christ taught us to do. May Almighty God open up hearts and minds of people who prosecute His holy people in Pakistan and around the world!

ISIS is Islam and Islam is ISIS

this guys hadn't go there ever.
Even algerians are scared over there.
He played he lost.

Anyway, a lot of taqqya in france today:

I was upset when i eared that.

Anyway, on twitter, there are a lot of froggies,like me, who scream " he's a liar!

hope you understood me


Thank you dear Muslims for this very good attempt to eliminate slavery from the Islam. But I think it is still a lot to be desired. Please read this part of the manifest which strives to abolish the slavery and the more brutal practices accounted for in Mohammed's history, which ISIS tries to imitate! (Quote:) 'Armed insurrection is forbidden in Islam for any reason other than clear disbelief by the ruler and not allowing people to pray. '
This is my commentary on this statement: It IS a contradiction in itself for a religion that preaches there is no compulsion in religion, to permit 'armed insurrection' against anyone if he is non Islamic! The only solution for the violence inherent of a religion, that kills those who want to leave it, for example, is fearless honesty, not only to see the contradictions in oneself, but those contradictions in the name of God you have to bow for, as if they were not there! http://lettertobaghdadi.com/index.php