My two-time debate opponent Anjem Choudary (click here and here for our debates) has been arrested as part of a terrorism investigation. Will the Islamophobia never end? 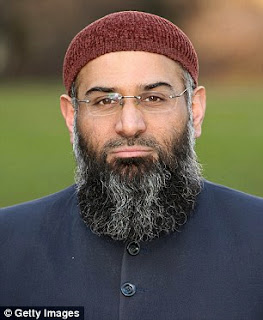 Daily Mail—Radical preacher Anjem Choudary was one of nine men arrested early this morning as part of an investigation into Islamist terrorism.

His arrest came shortly after he posted a series of nine tweets at about 5am today with an anti-Western tone, referring to the ongoing crisis involving ISIS militants in Iraq and Syria.

Some 19 residential, business or community premises were being searched today as part of the investigation, Scotland Yard said.

A police spokesman said: ‘These arrests and searches are part of an ongoing investigation into Islamist-related terrorism and are not in response to any immediate public safety risk.’

Al-Muhajiroun is understood to be the banned organisation in question, sources said this morning.

Earlier this week, it was reported that Choudary said he has no sympathy for Alan Henning, a volunteer aid worker who was captured in Syria.

ISIS militants threatened to behead the 47-year-old in a video released earlier this month, which showed the murder of another British man, David Haines.

Choudary co-founded the now banned group al-Muhajiroun. Fanatics Michael Adebolajo and Michael Adebowale, who were both jailed earlier this year for the brutal slaying of Fusilier Lee Rigby, were both seen at demonstrations organised by al-Muhajiroun, before it was banned. (Continue Reading.)

Being arrested is one thing being convicted is another. The man is a very crafty and shrewd lawyer and should not be under estimated. My persona; view is the Brits do not have the stomach to pursue this beyond an arrest for political gain.

They not only need a conviction they need a very long term imprisonment.

Actually what needs to done is make being convicted of terrorism and treason a capital offence. Beheading should be the way the sentence is carried out and then stuff his carcass in a pig skin and mail it to Mecca.

Arresting Anjem is long overdue. His citizenship should be revoked and he should be deported. I doubt that it'll happen, though. And he is just the tip of the iceberg.

Hey Mr David,
I know this is not the place for this post but couldn't find a way to contact you. I have few questions to ask you to improve my knowledge but is there anyway I can contact you in a private chat or email? I tried to look but did not find it.

Thanks God British intelligent finally got wisdom to find Anjem Choudary is nothing but a fanatic terrorist. It won’t be overstated to say that Islam is religion of terrorism and sharia laws are laws of devil, laws of dark age.

Question should be asked, does Sharia laws improve quality of Muslim lives in Muslim countries? Answer is no. Pakistan is example where Muslim Allah’s Sharia laws are code of people’s life but people of Pakistan are most corrupted in the world and the country became a failed state.

Aren't this the people that preach peace about Islam?Islam is peace they preach. ISIS is not Islamic. The word jihad means holy war against oneself. I really tire for this muslim people trying to coin another meaning to what their so called holy book written from god meants.

I am getting more and more disillusioned with British authorities and Britain in general. Is it just me, or is London and the rest of the UK becoming a hotbed for the spread of Islam, and therefore terrorism? If an ignorant, stupid person who does not bother to read converts to Islam, it probably won't bother so much because he won't know anything about what Islam really teaches anyway (which is the case for many of my countrymen). But if smart, educated people convert to Islam, it's bad, because they will read, and they will understand what Islam is really trying to say, and then become terrorists. You guys heard of "Jihad John" already? Another suspected Brit.

Choudary belongs in a prison.

He belongs behind bars forever.

Amjem and all Muslims should be deported to the Islamic state. It makes no sense to keep Muslims in western nations now that they have a Caliphate.

I wonder if he will be free to preach his hate and push islam on the general prison population?