More fruit of the "Arab Spring," which was praised and supported by Western politicians and the media, while people who understand Islam were warning: "Not a good idea." 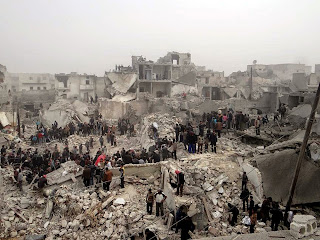 Istanbul (CNN)—The sudden, massive flood of refugees fleeing ISIS is unlike any other displacement in the 3½-year Syrian conflict.

As many as 200,000 people have left the area surrounding the Syrian Kurdish city of Kobani, also known as Ayn al-Arab, in just four days as ISIS advances into the area, the Syrian Observatory for Human Rights said Monday. Most have gone into Turkey, the London-based monitoring group said.

But the unprecedented surge that broke loose Friday has slowed, as Turkey reduced the number of open crossings from eight or nine to just two, said Ariane Rummery, a spokeswoman for the U.N. refugee agency. Processing the refugees is also taking time.

New arrivals are being searched for arms, receiving medical checks, being identified and receiving ID cards that they can use in Turkey to show their status to local authorities. (Continue Reading.)