Steven Joel Sotloff was an American journalist who was captured by jihadists in Syria in 2013. The Islamic State (ISIS) has released a video of his beheading. Meanwhile, politicians and the media continue to protect the ideology that led to Sotloff's death. 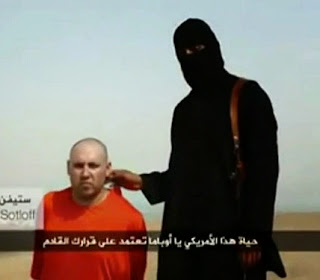 (CNN) — The ISIS terror group has published a video titled "A second message to America," showing the beheading of American journalist Steven Sotloff.

Sotloff speaks to the camera before he is killed, saying he is "paying the price" for U.S. intervention.

"Steven is a journalist who traveled to the Middle East to cover the suffering of Muslims at the hands of tyrants. Steven is a loyal and generous son, brother and grandson," she said. "He is an honorable man and has always tried to help the weak."

Sotloff appeared last month in an ISIS video showing the decapitation of another American journalist, James Foley. The militant in the video warned that Sotloff's fate depended on what President Barack Obama did next in Iraq. (Continue Reading.)

For a brief introduction to Muhammad's teachings about unbelievers, watch this video:

Shalom ! Brother Dave , Thank God for your work in exposing the children of perdition and their concocted , warmongering , misogynistic, hate and defeated religious ideology. My The Lord strengthen day by day and feels your heart with revelation knowledge
of the mystery God ways to Bring Glory to His NAME , i also pray for your your children for divinely creative miracle for their health . My question is someone post a question of the "RED LETTER ' from the bible Christ sayings what about the rest of the words are they not from Christ ? my answer was that's an early account of the disciple's eyewitness sayings of Chrsit . whats your take on that ? Steve! gadchad@gmail.com

Hello again Dr. David!
I was just wondering if there is any muslimwilling to debate you in this time around. If no why not!!!! Are they ashamed of their own so called "islam is peace" or Islam means "peace".
Please Dr. David or Brother Sam Shamoun if you guys have a bit of time is there any chance you could answer Dr. Shabir Ally. He made a video with a lot of lies. I do not think he would like to debate you guys with islam being exposed by isil.
Thank you all for the great job
GOD BLESS you all. AMEN

David, you are real courageous spreading Gospel in wilderness like John the Baptist did where 1.4 billion Muslims living in darkness with messages from brutal prophet of devil, whose book, the Quran adds fuel to encourage Jihadist to spread kingdom of devil. I wonder when our President Obama will have a plan to up root ISIS and the books that cause Muslims to be a devil, like books of communism. We want our president to defend humanity if not Gospel of God to save life. May God bless you and your family from devils!

One Muslim blogger posted an alleged "fatwa" by as far as I can tell unknown and un named scholars condemning ISIS for taking woman and children captive and selling them off.

Did these scholars use Islamic sources to condemn this act? Absolutely not, instead they appealed to Kuffar laws and treaties. Like the Geneva convention and treaties against Slavery.