Muslims in the Netherlands Rally for ISIS 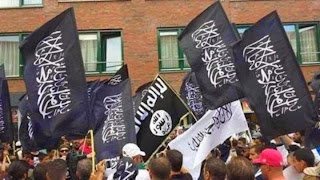 Newsweek—Jewish human rights group the Simon Wiesenthal Center has expressed its shock that protests in support of Islamic terrorist group ISIS have gone undeterred by Dutch authorities in the Hague. Two public rallies, expressing support for ISIS have been held this month, with chants advocating the murder of “dirty Jews from the sewers” heard at both.

The first protest inciting violence towards Jews was held on July 4, while a second went ahead last week, on July 24, Dutch newspaper NL Times reports.

Doctor Shimon Samuels of the Simon Wiesenthal Center addressed a passionate letter to the Dutch prime minister in response to the protests, asking him to rescind approval should a third demonstration of this kind be organised.

“Yesterday, the call in Arabic and Dutch was for ‘dirty Jews from the sewers to be killed,’” Samuels told Jewish paper the Algemeiner, a day after the second protest.

“This rally had little to do with Gaza solidarity. It was unambiguously targeted against Jews, but also according to the Dutch press sought to lynch journalists, who were pulled to safety by the police, otherwise serving as silent spectators.” (Continue Reading.)

Wait! Wait! Weren't Muslims some of the first people murdered by ISIS? Who's to say that ISIS wouldn't go after the "nearer enemy" in Europe FIRST if they find strong support in Europe?

OOoopsie! Pledge allegiance 'til death to ISIS (and quickly die for them) or die being hunted by, ummm, ISIS...

What's wrong with this rationale? Okay, okay! I get it now: it's RACIST and ISLAMOPHOBIC to want to live passed 16 years of age (13?) and it's BIGOTED and BIASED to NOT BE anxious for death in a suicide bombing for Allahu Ohynksmorr (and for his co-creator, the one-and-only Apusstle of Allahu Ohynksmorr: Mohammed!!!). ;-)

NOW, Hamas is making more sense. The poor, pitiful "Palestinian" people were not seeking and worshiping death FERVENTLY enough! SO, Hamas [ever the gracious enforcers of piety] seeks to bring suffering and DEATH to the "Palestinian" people (whether they want it or not) by targeting the Israelis from behind the civilian shields - provided by the (unwilling) "Palestinian" children and women & other vulnerables. HOW THOUGHTFUL of Hamas!

Hey, they can't let those braggarts from ISIS get all the "glory". More babies - more death - more bodies - more misery. THAT's the way of Hamas! That's the way of Islam! (so long as the big-shots get to call in the bombs and the po' folks get targeted) WHAT A BLAST!!

It gets worse and worse here in Holland.
This is from last thursday:

I'm so glad I found Islam. It does get such a negative coverage especially in Western Europe but when you enter it you find yourself in a place like no other.