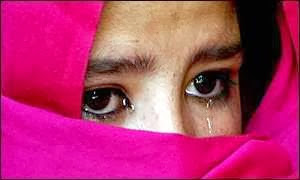 According to both Sunni sources and Shia sources, Muhammad allowed his followers to practice a form of prostitution called "nikah al-mut'ah." If a Muslim wants to have sex with a prostitute, he simply needs her to agree to temporary marriage in exchange for a sum of money (e.g., "We agree to be married for one hour, in exchange for $100"). The Muslim then gets to have sex with the prostitute, and it's perfectly acceptable to Allah.

Sunni Muslims often claim that nikah al-mut'ah was eventually outlawed by Muhammad. What they don't tell you is that Sunni sources also claim that it was Umar (rather than Muhammad) who outlawed mut'ah and that the Qur'an itself guarantees a Muslim's right to have sex with prostitutes (click here to read the sources).

It should come as no surprise, then, that mut'ah is quite common, as confirmed by a former sex worker who shared this comment in response to one of our videos on mut'ah: 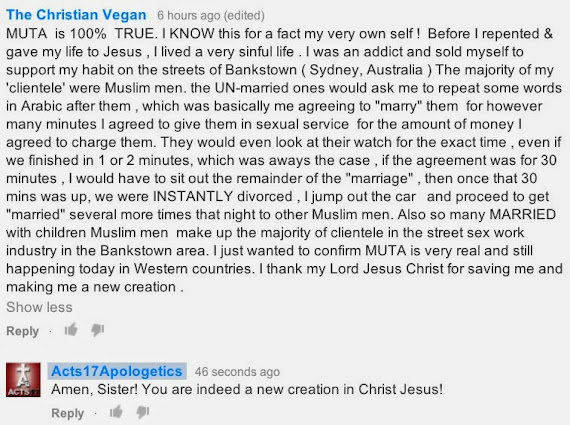 Oddly enough, Muslims in the West continue to tell us that Muhammad's teachings are pure and holy.
Posted by David Wood at 11:50 AM

It's nice to know that she's now a Christian! ;)

In reality, Nikah al-Mut'ah can only be called adultery and fornication - which, as we can see from the Scriptures that were in existence long before Muhammad and his Quran, is a grievous sin in God's eyes.

That Muhammad really was quite irresponsible and/or deluded in his promoting such a doctrine that only causes men to sin and offend God more and more and risk eternal damnation. Unless they repent and stop following this doctrine of devils it can only end in disaster.

As God Himself says:

“Therefore a man shall leave his father and mother and be joined to his wife, and they shall become one flesh.” Genesis 2:24

“You shall not commit adultery” Exodus 20:14

“You have heard that it was said to those of old, ‘You shall not commit adultery.’ But I say to you that whoever looks at a woman to lust for her has already committed adultery with her in his heart.” Matthew 5:27-28

And Paul, the servant of Christ/God, and inspired by the Holy Spirit (2 Peter 1:21) says:

And in Hebrews we read:

Marriage is honorable among all, and the bed undefiled; but fornicators and adulterers God will judge. (Hebrews 13:4 [As pointed out in Genesis 2:24, marriage here means between one man and one woman])

Bankstown is a seedy area is Sydney, it also has a huge Arabic population! It is a very sound story, as a sydneysider I can assure you many Muslims around that area undertake questionable activities (even ones that are forbidden), they are also always trying to pick up girls and for the religious, a muta is not uncommon, in fact it justifies their promiscuity as Muslims. Thus, for all other people who are unaware of her repeated mention of bankstown, I'm confirming that it validates her claims ten fold!! Thank god she has found his undying love :)!!!!