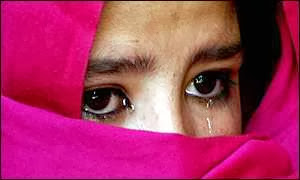 The Prophet of Islam allowed his followers to practice a form of prostitution called Nikah al-Mut'ah. In Muhammad's time, a Muslim could pay a woman for "temporary marriage," which would last a few hours, days, weeks, or months (depending on the agreement). Many Muslims today claim that Muhammad eventually changed his mind about this obviously immoral practice, and that Mut'ah is now forbidden in Islam (certain Muslim sources suggest this). But these Muslims fail to mention that some of Islam's most trusted sources plainly declare that Muhammad never prohibited Mut'ah. For instance, the following passage in Sahih Muslim says that Muslims were practicing Mut'ah well beyond the lifetime of Muhammad:


Some hadith claim that it was Umar, rather than Muhammad, who outlawed Mut'ah:


According to Sahih al-Bukhari (Sunni Islam's most trusted collection of ahadith), Mut'ah is justified by the Qur'an itself! Consider the following verse from the Qur'an:

Qur'an 5:87—O ye who believe! Forbid not the good things which Allah hath made lawful for you, and transgress not, Lo! Allah loveth not transgressors.


Notice how this verse was used by Muhammad:

Sahih al-Bukhari 5079—We used to participate in the holy battles led by Allah's Messenger and we had nothing (no wives) with us. So we said, "Shall we get ourselves castrated?" He forbade us that and then allowed us to marry a woman temporarily by giving her even a garment and then he recited to us: "O you who believe! Make not unlawful the good things which Allah has made lawful for you." (5.87)


Hence, Muslim men who want to hire prostitutes can simply point out that both the Qur'an (the Word of Allah) and Muhammad (Islam's final prophet) allowed prostitution, and that later Muslims (like Umar) cannot overrule Allah and Muhammad.

For some of the practical consequences of Muhammad's teachings about Mut'ah, see the following articles:

For a more thorough discussion of Mut'ah in the Islamic sources, see the following article by Sam Shamoun:

"Revisiting Muhammad’s Permitting a Form of Prostitution known As Muta"
Posted by David Wood at 2:54 PM

How can any logical person reading this about Mohammed and his evil revelations, seriously dedicate their lives and trust their soul to a god who is clearly obsessed with sexual gratification at every turn? Islam is an abomination! The evil one has pulled off a ripper! How has he gotten away with such blatant perversion and have even one follower let alone over a billion! Not to mention billions you have lost their soul since mo's time. It really disgusts me.
Keep exposing the fraud!!!

God's Messenger said to Hagar, "You will have a son and his name will be Ishmael and he will be as a Wild Donkey and his hand will be against everyone and everyone's hand against him". That is the Muslim destiny and only GOD can change that... NOT Their Allah; or whoever they think that is.

The -hypocrisy of the men of islam -women are -stoned for adultery-the men can have 4 wives -a temporary wife -can have sex slaves -marry little 6 year old children -babies even -woman find it very hard to get a divorce -easy for a man and are regarded as worth only half of the value of a man-islam a paradise of depravity for islamic men.

Assalaamu Alaikum #UN#,
Please watch, like and share The Ultimate “Muta marriage documentary”. This is an unprecedented documentary revealing many suppressed truths about Muta marriage from the prominent Sunni “Saheeh books”. We have finally finished this powerful and comprehensive research, which is one of its kind. It exposes many shocking realities and evidence about Muta marriage, which are often kept hidden from the majority of the people. This documentary took a very long time to research and produce. It required the downloading of more than 4.8 Gigabytes worth of books on PDF, as well as hundreds of hours of work in the research and production process. This is the most comprehensive documentary on this topic to date. It addresses most of the common arguments and misconceptions about Muta, So please help to promote it so that it reaches to the widest audience possible and helps to combat all the widespread falsehood and disinformation about this topic.

TOPICS COVERED:
(1) Muta is in the Quran - definitions & background information
(2) Who prohibited the two Mutas - Umar's Famous Sermon forbidding the two Mutas
(3) Who prohibited the Muta of Hajj
(4) Companions who allowed Muta marriage
(5) Companions who did Muta marriage Including Asmaa The daughter of Abubakr
(6) Muta is in the Quraan verse 4:24 & Refuting the prohibition and Abrogation claims
(7) shocking distortion and tampering of the hadeeths of Muta
(8) Sunni invented temporary marriages, Misyar Misfar etc & Reasons for Muta
(9) Common misconceptions about Muta - Muta is not Zina according to the Sunni schools of thought – instructions on how to perform Muta marriage
Ali Mohamad, # DT#

“O people, I had permitted you Mutah before, [but now] whoever of you has any part in it currently must part with her, and do not take back anything which you may have given them, as Allah Exalted and Majestic has forbidden it until the day of resurrection.” [Muslim, Abu Dawood, Ibn Majah, Nasa`i, and Darimi]

“The Messenger of Allah had forbidden Mutah on the day of Khaybar and had forbidden the eating of the meat of domestic camels.” [Bukhari, Muslim, Tirmizy, Ibn Majah, Nasa`i, Tahawy, Shafi’i, Bayhaqy, and Hazimy]

Ali (رضّى الله عنه) said to a man who was engaging in Mutah:

“You are a straying person, the Messenger of Allah has forbidden temporary marriage and the meat of domestic camels on the day of Khaybar.” [Muslim and Bayhaqy]

Look at the context in which the material is spoken. At that time, wars would go for prolonged times so there was a need among the men (a biological need) so in order to provide ease for the men of the war, this was given. However, prostitution isn't allowed since this can only be applied in the situation of war. Please read Islam by context and stop manipulating it

Anything that is SEX; Yes, they are all looking for those 72 virgins in their paradise and like to practice the pleasure of SEX... Wow, ever wonder what Hell will be like with all of the Muslim's there???

Neha, can you provide proof that it can only be applied in a situation of war? What changes have been made, or what new laws have been placed that prove your point?

So any problems with Islam.. fights ..hatred .. sexuality...deceiving others .. killing mercilessly .. cruel decisions .. I know why they say The Bible is changed because they don't have guts to live life up to the standards of the Teachings of Jesus Christ, a peaceful and moral life with a single wife whom you can divorce except adultery, loving each other irrespective their religions, forgiving others no matter how much they hurt you, living a pure life.

What happened? I was here just a while ago and saw some images of the Sahih Bukhari source (which I'm trying to find on the web), but now I don't see them anymore.

Just so you "Christians" know, none of you are believing in the scriptures, you're following the trinity church, so you're just as much of satanists than you accuse the Muslims to be. There has always been prostitution in the scriptures, all prophets had more than 1 wife. You white Anglo Saxons are believers in Ba'al, denying the real children of Israel of their throne. You misinterpret, change the scriptures as you wish. You are just as much pagans with all your doctrines, fake holy days.

To "Unknown"... Yes, it's pretty bad, but we need to remember that everyone's soul is lost without Jesus, and the heart is deceitfully wicked.

To "Luemmel", the Trinity is a Scriptural principle. You liar, show me a place where prostitution IS SANCTIFIED AS HOLY AND GOOD in the Bible... you won't find it. As to polygamy, that is not prostitution (doesn't mean it's good either) - BUT Mutah "wives" extends beyond Islam's polygamy of a 4 wife limit (which Muhammad exceeded), it is PAYING A STRANGER FOR TEMPORARY "MARRIAGE" WHICH IS SOLELY FOR SEXUAL PLEASURE WHILE THE MAN IS AWAY FROM HIS WIFE(S), AFTER WHICH THE CONTRADICT IS TERMINATED! And that's on top of sex slaves and raping captives to then be sold. Jesus quoted from Genesis that a man will leave his father and mother and be cleaved to his wife and the TWO shall be one flesh, and also said that one should not get divorced... He even elaborated that a certificate of divorce was allowed because of the HARDNESS of their hearts, but from the beginning it was not so. What happened with Abraham when Sarah had him have sex with her handmaid to bare Ishmael, or others to have six other sons? God only recognized Isaac from Abraham's true wife. Jacob was deceived into marrying a woman he didn't love, etc. AH hahahaha!!! Are you a black "Hebrew" Israelite? You're really confused man, you're the one who doesn't know the Scripture and twists it. There is no more Jew, nor Gentile, nor man, nor woman, slave, nor free, but we are all one in Christ Jesus. Repent, and trust in and obey Jesus.