Muhammad allowed his followers to practice a form of prostitution called "nikah al-mut'ah." Muslim men would agree to be married to a woman for a short period of time in order to have sex with her.

Some Muslim women are now convinced that they can please Allah by passing themselves around to jihadists. 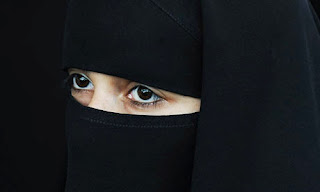 Al-Arabiya—Three Malaysian women, apparently sympathetic to the Islamic State of Iraq and Syria (ISIS), have reportedly travelled to the Middle East to offer themselves sexually to militants, an Malaysian intelligence official said in an interview published Wednesday.

“These women are believed to have offered themselves in sexual comfort roles to ISIS fighters,” the intelligence officer, who spoke on condition of anonymity, told The Malaysian Insider.

He added: “This concept may seem controversial but it has arisen as certain Muslim women here are showing sympathy for the ISIS.”

“Intelligence exchanged with other countries revealed that Sunni Muslim women from Australia and the United Kingdom had also joined up with ISIS,” said the intelligence official. (Continue Reading.)

For a brief discussion of nikah al-mut'ah, watch this:

So they go to have sexual Jihad, I'm wondering if they then get stoned for adultery.

Can someone help me out?

Hello david, i know this is off-topic but you are a experts about that.

I remember that you/ Joseph and Sam said that Muhammed never said out his own mouth.

Here i have something for you that Muhammed said i'm a prophet.

It is believed that Muhammad explained the phrase "Khatamun-Nabiyyin" by giving examples such as: "I am the last in line of the Prophets of God
the Prophet Mohammed(saw) said "Allah has sent me as an apostle so that I may demonstrate perfection of character, refinement of manners and loftiness of deportment." (2*) (Malik, Mawatta; Ahmed, Musnad; Mishkat)﻿
------------------------------

I hope i gave you proof.

Not sure what you're talking about with your off-topic comment.

David, can help me out?
I told you it was off-topic .

I cant contact you personally, that's why i ask you here.

While Pastor Joseph and Sam said it never said that.

That why i ask your help.
Can you help me with that to refute that?

Still don't know what you're talking about. I'm guessing you misunderstood what they were saying. Give me the clip from ABN.

Dave, i'm so sorry for the off-topic.

I love that all your show.

You was there Dave.

This is the commentary from the Muslim who give this commentary that Muhammed said he is a Prophet.

It is believed that Muhammad explained the phrase "Khatamun-Nabiyyin" by giving examples such as: "I am the last in line of the Prophets of God
the Prophet Mohammed(saw) said "Allah has sent me as an apostle so that I may demonstrate perfection of character, refinement of manners and loftiness of deportment." (2*) (Malik, Mawatta; Ahmed, Musnad; Mishkat)﻿
-----------------------------------

Can you help me out please?

You're quoting the Hadith. What does that have to do with what we're saying? Do you even understand the point? We're not saying, "The Qur'an doesn't say X, so X is false." The Muslim is making an argument saying that about the Bible. We're showing him how silly it is by applying the same argument to the Qur'an.

Quoting the Hadith does nothing to change this.