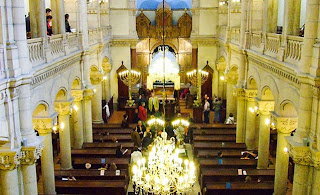 Newsweek—Two teenage girls have been arrested on suspicion of conspiring to blow up a synagogue in Lyon, French news websites have reported.

According to JSS News and Europe 1, a source from the French security agency the Central Directorate of Homeland Intelligence revealed that two Muslim girls, aged 15 and 17, were arrested in the Tarbes and Venissieux neighbourhoods a week ago, after authorities uncovered a plan to carry out a suicide bombing inside the Great Synagogue of Lyon. They were indicted on August 22nd for conspiracy to commit terrorism.

An unnamed security source also revealed that the two teenagers had never met, but communicated only via social media. “These girls were part of a network of young Islamists who were being monitored by security services,” said the unnamed security source. Security services are becoming increasingly concerned with online radicalisation, particularly following the proliferation of videos created by jihadist groups such as Islamic State. (Continue Reading.)

For a brief introduction to what Islam teaches about unbelievers, watch this:

Thanks for all your work David, the fullness of time is closer then ever and you are revealing on a daily basis who the prince of the air is.My prayer is that more people hear the truth before america is overwhelming subdued by islam.

You are really clued up well. Keep it up . Enlighten the world about the problems of Islam.

Damn, i read french news here, i didn't watch it @french Tv nor live tweeter
Thanks

David, I watched this debate of yours with Shadid Lewis. I think he didn't actually address the issue of abrogation, but emphasized only that there are peaceful verses in the Quran too.