According to Islam's most trusted sources, Muhammad allowed his followers to rape their female captives. Muhammad, of course, would take the most beautiful captives to his own tent. Yet when Islamic State jihadists imitate their prophet (as the Qur'an commands in 33:21), the media calls it an "extreme interpretation of Islam." 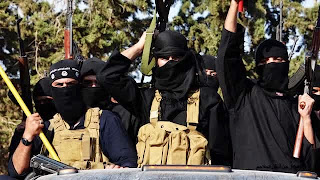 DAHUK, IRAQ — Hundreds of Yazidi women who were captured by Islamic extremists during their sweep through the town of Sinjar are being incarcerated at scattered locations across northern Iraq in what increasingly looks like a deliberate attempt to co-opt them into service as the wives of fighters.

As the militants with the al-Qaeda-inspired Islamic State surged into the area from surrounding Arab villages two weeks ago, snaring those who had not managed to flee, they showed a marked interest in detaining women, notably the youngest and prettiest, according to witnesses, relatives and in some instances the women themselves.

Once in custody, the women are presented with a bleak choice.

Those who convert to Islam can be promised a good life, with a house of their own and — implicitly — a Muslim husband, because the extreme interpretation of Islam promoted by the Islamic State does not permit women to live alone. (Continue Reading.)