There were four suicide attacks by women in the past week in Kano, Nigeria. Now Boko Haram is strapping bombs to little girls. Meanwhile, politicians and the media in the West continue to defend the religion that leads to these tactics. Lots of blood on lots of hands. 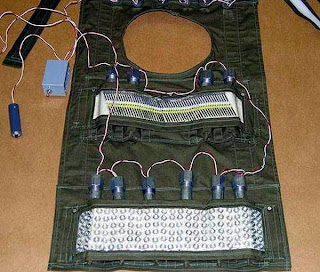 The third suspect, a male, was identified as Iliya Dahiru.

They were arrested along Zaria road in Katsina. . . .

Coordinator of the National Information Centre, Mike Omeri, who disclosed this in Abuja, said the suspects were arrested in a Honda CRV car when they were asked to disembark for security checks.

Hadiza was discovered to have been strapped with an explosives belt and immediately, Iliya and Zainab made attempt to escape with the car but were blocked by concerned Nigerians, Omeri said.

“It is on this note that we appeal to parents to consciously observe and watch their children’s activities to prevent them from participating in unwholesome activities, particularly acts of terrorism,” he said.

He also warned parents against engaging private Koran teachers for their wards, advising rather that they be taught in selected regular Islamic schools. (Continue Reading.)

did they rape the little girls first?........islam is sick

Yeah because that's what Islam teaches right? Why can't you lot look at them as just criminals instead of "ugh Muslims"???? There are billions of muslims around the world, if it was really an Islamic teaching to rape & bomb every other innocent being then we'd all be dead. Why would I, as a muslim, use up all my time praying and giving to charity (as a way to get to heaven) if the Qur'an said "committing suicide = ticket to heaven"? Think and open your eyes people! We muslims hate these terrorists more than non-musliims do bc not only are they killing, they are tarnishing our religion.

You asked a good question about why you would waste your time giving to charity and praying if the Qur'an says that dying in jihad gets you a ticket to heaven. But this comes from the hadith and sira. Muhammad told his followers that those who die while fighting the unbelievers are guaranteed paradise. So why would you spend your life praying when you can simply join ISIS?

BTW, the Qur'an defines Muslims as those who "slay and are slain":

It also says that Muslims must mistreat unbelievers:

If you don't do these things, why do you call yourself a Muslim?

First of, I’m pretty sure you’ve heard from a muslim or two that, you cannot gain full comprehension of the Qur’an unless you read it & understand it in it’s original text/form (Arabic). Translations & interpretations can change the meaning & context of certain statements mentioned in a Holy Book incredibly (alike the Bible). You’re probably thinking “yeah whatever, another way to deny the 'truth'”: it’s not. For instance, I, as have many others, have experienced that annoying moment of sharing a joke in a particular language then translating it into English (or vice versa) and it to turns out sounding utterly absurd and far from funny.

Moreover, the mentioning of the word (or connotations of) ‘fight’ does not imply the same meaning throughout. There is a lot of grammatical confusions. If I said ‘I’m going to fight for this job’ or ‘I will fight for my children’, it does not necessarily mean I will slice every prick that stands in my way to get that job or make my kids happy. It is used metaphorically. Fight in Allah’s cause is to avoid and refute and stay away from beliefs that state otherwise and to obey the almighty creator. Our biggest enemy on this earth is Shaytaan (Satan) for your information. Unfortunately, he has the ability to lead a lot of believers astray into committing sins and converting in religions other than Islam. WE (believers) must fight against that and strengthen our imaan (faith) for Allah (swa).

The best form of Jihad is ‘Dawah’ which refers to the preaching of Islam. And as for war, it is fighting in DEFENSE because killing the innocent (Kuffar or not) is prohibited in Islam! You cannot tell me bombings that happen in the West (e.g. 7/11) never hurt any Muslims, just non-muslims. Thirdly, it does not make sense for these fatuous individuals to kill in places that caused no harm, for the sake of God. Where's the logic in that? There is stupidity, evil & foolishness in every social group. These arseholes are putting MY & other Muslims' life at risk as people get killed for being a Muslim over here.

Your weak hadiths and poor understanding of Qur’an verses makes you think that Qur’an/Islam = terrorism. You use the same chapter(s) on & on and fail to acknowledge other teachings of Islam: Great research there mate!

Nice try libra! With your logic non Arabic speakers will never know what the quran says! How can that make it a religion for the whole world? Weak Hadith? Really? What would be a strong Hadith? Please advise. Let me guess one that doesn't damn islam or its cult founder mo. turn it up! You'll have to do better than that.

Did I say you will ‘never’ understand at all or “full comprehension"? At this rate you can hardly grasp English reading skills. Also, what a fatuous comment. Alike algebra & other languages there’s this thing called ‘learning'; Islamic teachings & arabic must be taught to every Muslims (for obvious reasons) hence we have institutions, 'Madrasa' (Islamic school), where the former takes place. I'm non-arabic speaker but the more I learn the better I understand the Qur'an. Of course translations are not entirely incorrect otherwise (non-Arab) converts would have not been able to see the beauty of it. It’s not a global-friendly religion because it is in Arabic you say? What so English is global friendly? The ignorance of some lol. Not even a quarter of the world’s population speak English - it’s only the internet and media that makes some think that… “everything of the West is the norm”.

You're again proving my point; only fishing for negativity. How will you even get to know anything about a religion with that closed mindset of yours? Only wanting Hadith that prove the bad points. Bloody hell! Grow up and go into things with a balance view otherwise be quiet. You're only satisfied when YOUR thoughts are supported. Quite immature of you. (I, alike fellow muslims, acknowledge there are parts which bring discomfort but not because it’s about terrorism) Anything we try and correct from bigotry misconceptions is immediately deemed as untrue or conspiracy and, shock, this is always done by Islamophobes. Hmmm…!

It’s not complicated but ok; a strong Hadith is simply one with evidence whilst a weak one is one with little to no evidence (whereby scholars disagree): I’m sure you could’ve worked that one out yourself. I will never understand how one can just absorbs everything they’re fed; how can you not challenge the authenticity of everything thrown at you? “Bob said A is the correct answer so A is the correct answer” - an educated individual will want to know “WHY?” and “HOW” instead of just agreeing. Similarly, with Hadiths and pretty much all secondary sources of information.

Before anyone starts citing that favourite chapter of this site I am not denying what it says. However, you’ve grasped inaccurate concepts of theses verses.

With all due respect, unlike you I’m not denying the words of God. You’re failing to look beyond the bad. I can clearly see and notice that parts of the Qur’an mention this & that but there are parts of other Holy Books including the Bible where it contains statements that make us uncomfortable. That’s just the way it is.

Founders, you cannot tell me that this is not an Islam-bashing website & that you love your Muslims friends. Pure hatred.