Dozens of Prostitutes Killed in Baghdad

Prostitution is perfectly legal in Islam, provided the participants agree to "temporary marriage" (i.e., they agree to be married during the time they're having sex).

Apparently, a brothel in Iraq didn't conform to Islamic standards of acceptable prostitution. Dozens of women were slaughtered in the name of Allah.

Meanwhile, children in Europe and the U.S. are being indoctrinated with the claim that no culture is better than any other culture (except that ours is worse than all others, so the story goes).

"Twenty-five women were killed and eight people wounded, among them four men, when gunmen stormed two buildings in a residential compound in Zayouna in east Baghdad," an interior ministry official told AFP. 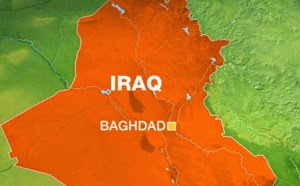 "When we walked up the stairs, we saw a couple of women's bodies and blood streaming down the stairs. We entered a flat and found bodies everywhere, some lying on the sofa, some on the ground, and one woman who apparently had tried to hide in a cupboard in the kitchen shot to death there."

An AFP correspondent on the scene said police cordoned off the area while eyewitnesses also said several people were arrested in the aftermath of the killings.

"This is the fate of any prostitution," read a inscription on the door of the one of the raided buildings. (Continue Reading.)

It seems as if this site is aimed at attacking Muslims. When not all of them of them approve of these tragedies. We as Christians should be careful of not judging others , let us not be a stumbling block as the new testament says. We should lead Muslims to Jesus with love, and I would understand why some Muslims would feel offended by the constant attack at their religions by what some Muslims do, not all.

They really don't care who they kill, just so long as they're killing someone.

Where did we say or imply that all Muslims do these things?

And if it's wrong to criticize, why are you here criticizing? Do you not realize that you're doing exactly what you condemn others for doing? (There's a word for that. It's called "hypocrisy.")

Marcos, what I see here is possibly the most important site on the web today! David and friends are doing the world a favour by exposing Islam for what it is! Sure not all Muslims behave like this, but clearly the teachings of its founder has created this vile behaviour. Contrast this with orthodox Christian readings of true scripture and compare !

I concur Marcos!
Let's turn a blind eye and pretend nothing is really going on. Let's allow this world to truly go down the toilet. When u follow, make sure you use your left foot first.

to David and Marcos these killing yet has nothing to do with Muslims or christian if it is then what you going to say when all western were encouraged Saddam to kill Muslims like Kurds and others by giving him chemical weapon and more and when his role end for Western the whole thing turn up side down and killing start from your side even more what you will say about that ?? isn't it Hippocratic too or is it to do with Islam killing?

Nothing could make it more clear that Islam is just another world-wide criminal enterprise. The Islamic "gang" is semi-unique because it has trapped so many millions of people under the guise of "religion" - but none of the Islamic "piety" makes it any less criminal. None of the sincerity of the precious Muslim people makes the trap in which they are caught any less deadly.

The lives of these "sex workers" might have been spared if their genitals had been mutilated in the Islamic way and if they had been participating in providing gratification for members of the Islamic mafia through "Mut'a" marriages. Most of the profits from their efforts would have been directed to a local Imam - for his cut - and on to funding terrorism and the spread of the criminal enterprise (shariah). They just got caught either working for themselves or working with the wrong gang.

The Eye-Attila-Kho-meanie (who took his own BS entirely too seriously) made it clear years ago: "there is no fun in Islam", except for wealthy, male-dominant members (usually Arab) of the fascist, racist, collectivist, misogynist, pedophile death-cult of 'gangstas' known to us as "Islam".

Islam is the shame of human history and the poison of human civilization. Those who are trapped in it experience both the oppression of their souls and the physical & emotional violence perpetrated against themselves and their loved ones. Those of us who struggle to stop and reverse the spread of Islam - and to FREE those trapped in it - understand the meaning of the abyss represented by the cult.

No matter how much we love the Muslim people, we must do EVERYTHING in our power to disable their enterprises and close off their sources of funding. Perhaps in being cruel, we can be kind enough to encourage them to escape the gang - before they wind up leaving 'feet-first'.