These are different countries with different cultural backgrounds. Yet there is one common factor that unites them. Oddly enough, that one common factor is something we can't openly discuss without being called "bigots" and "Islamophobes." And so the violence continues. 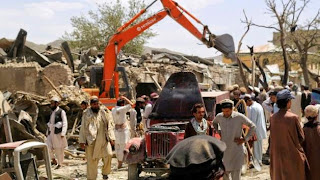 Fox News—An Afghan government official says that at least 89 people were killed and more than 40 were wounded Tuesday when a suicide bomber blew up a car packed with explosives near a busy market and a mosque in the eastern part of the country.

Defense Ministry spokesman Gen. Mohammad Zahir Azimi told the Associated Press that the military is providing helicopters and ambulances to transport the victims to the provincial capital, Sharan. So far 42 people wounded in the explosion have been moved to hospitals there, Azimi said.

The explosion destroyed more than 20 shops and dozens of vehicles, he added.

Mohammad Reza Kharoti, an administration chief, said all the casualties were civilians. No group immediately claimed responsibility for the attack.

"It was a very brutal suicide attack against poor civilians," he said. "There was no military base nearby."

The bombing was the first major attack since a weekend deal between the two Afghan presidential contenders brokered by U.S. Secretary of State John Kerry averted a dangerous rift in the country's troubled democracy.

One of the two, former Finance Minister Ashraf Ghani Ahmadzai, told The Associated Press on Monday that he would meet his rival, former Foreign Minister Abdullah Abdullah, on Tuesday to begin working out the framework for the next government, with participation from both camps and all communities in the country.

But violence has continued unabated in Afghanistan. (Continue Reading.)

Email ThisBlogThis!Share to TwitterShare to FacebookShare to Pinterest
Labels: Afghanistan

still 5.6 billions people left to get bombed or get become muslim before the end ^^