Wouldn't we be shocked if Jews in France started attacking mosques? Why, then, aren't we surprised when Muslims in France attack synagogues? 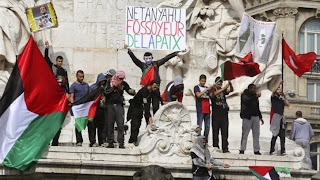 Fox News—Recent violence in Gaza raised tensions in France Sunday as pro-Palestinian protesters tried to force their way into a Paris synagogue with bats and chairs, then fought with security officers who blocked their way, according to police and a witness.

Sunday's unrest by a few dozen troublemakers came at the end of sizable protest in the French capital demanding an end to Israeli strikes on Gaza and accusing Western leaders of not doing enough to stop them.

Prime Minister Manuel Valls said two Paris synagogues had been targeted by unspecified violence that he called "inadmissible." In a statement, he said, "France will never tolerate using violent words or acts to import the Israeli-Palestinian conflict on our soil."

A police spokeswoman said the Don Isaac Abravanel synagogue in eastern Paris was targeted during a service, and worshippers were blocked inside while police pushed protesters back. The spokeswoman said all those inside left safely by Sunday evening.

Aline Le Bail-Kremer watched the incident unfold from her window across the street. She said protesters came from two directions and converged on the synagogue, grabbing chairs from sidewalk cafes and wielding bats as they tried to push past security guards.

What stereotype? The stereotype that portrays Muslims as unable to control themselves in their VIOLENT hatred of Jewish people and of all things Hebrew. (Including the God of the Hebrews - Whom they continue to tell us is the same god as Islam's Allah - but never mind that.)

RACIST! ISLAMOPHOBIC! ANTI-MUSLIM! These men should have their heads and beards SHAVEN as punishment for not being peaceful, tolerant and inclusive - like they tell us all Muslims are. Any women involved should be forced to wear niqabs bearing tags that prominently announce "Made In Israel" and are colored bright Blue and White - with a prominent Star of David.

Don't you just hate it when people do things that make the 'Religion of Peace'(TM) look like just so much pagan savagery - instead of the "benevolent, peaceful and uplifting" religion that Muslims tell us it is?

I declare to you, these destructive types are giving Mohammedanism a bad name! People will wind up thinking that the founder of Islam was nothing more than a murderer, pirate, terrorist, pedophile, rapist, misogynist, torturer, bigot, racist, liar, thief and necrophiliac. But at least, those are some of the nicer things that're being said about him... but still...

Protest demonstration only a cover up ... Then they only need small excused to start a riot while shout allahu akbar and the target as usual the jews... For this time being .. But when they growing stronger, they will attack church n christians also ...
If the french government don't take this matter seriouslly with hard punishment then we can certain in few years to come frech would turn to islamic country ....
How to handle them ... Easy, since they know language of power then government must use all their power to restore the order ... But if the government don't do nothing about the actions then next time would be worse