Wow. The people of France took in an Algerian immigrant and invited him to live and prosper in their country. He responded by planning to blow up the Eiffel Tower and the Louvre. 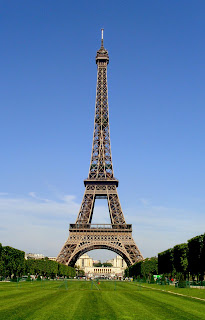 The revelation comes as the country unveiled new anti-terror rules which included a proposal to ban terror suspects from leaving the country if it is thought they intend to fight abroad, The Telegraph reported.

French authorities revealed they arrested a 29-year-old Algerian butcher living in southern France June 2013, after they found coded messages between him and a high-ranking Al Qaeda member discussing how “to conduct jihad in the place you are currently,” according to Le Parisien.

The suspect, identified in the newspaper report as Ali M, reportedly said he would target French landmarks including the Eiffel Tower, Louvre and “cultural events that take place in the south of France in which thousands of Christians gather for a month.”

The father of two reportedly had signaled his willingness to travel for training before returning to France to “await your instructions,” the Telegraph reported.

French police say they arrested him a month before he was to travel to Tunisia, and then Algeria for training.

Dear David Wood. I am trying to find more sources where Bukhari talks about child marriage. Some of the links you put up lead to dead ends. I need to show a friend a reliable source for that hadith. He is trying to convert me.

As our lord Jesus Christ apprised us, we will be persecuted endlessly for his name and because we profess the truth of the gospel.

Islamic supremacists will bow and repent on the day of the rapture.

Then you're going to have to get a copy of Bukhari and other sources.

I'd go through Sam's articles and look up the references:

Usually when I invite over someone to my home and he misbehaves I THROW HIM OUT. The French Govt is at best idiotic, they should deport them after they serve their sentence. But common sense and political appeasement don't go together.


it's easier to refer to quran :
s65v4 : if you can divorce from prepubescent child, it 's because they got married first ^^

Here is some links to Islamic topics

Thank you for your advice.

Dude..how hard is it to say no thank you, I am very safe and happy with Jesus Christ my God, lord and saviour? I am a Christian from Malaysia and I only date muslim girls and they are always running their mouths over and over and over about islam being the religion of peace and beauty and how muhammad is the saviour of mankind and allah is suchhhh a forgiving, merciful and gentle god..blah blah blah..

And you know what I do to counter all that bull crap? I get them to explain about how could such a forgiving, merciful and gentle god allow a 55 year old man marry and rape a 6 year old baby girl named aisha and you should also watch Three Quran Verses Every Christian Should Know courtesy of Acts17Apologetics. Which is what they are there for.

French gouvernement is a joke.
I'm French and I choose to live in a different country because of actual French population and government.
Even policeman are scared of them and d want to enter in their "cite" (that we can translate as ghetto I suppose).

You should check what happened today in Paris in place de la Bastille and at the synagogue of rue de la roquette.
Jews were forced to stay inside until more than 8pm as some "Palestinians protestors" were outside breaking stuff, throwing stuff and screaming "death to all Jews".
Lovely country.

Hey Davy, you only date Muslim girls? No offense mate, I'm just curious. Why? Is it your chosen form of proselytising? Are you dating more than one at the same time? Lol, just a cheeky question. Okay seriously, I'm just wondering, because unless that/those girl(s) can take it as far as to renounce Islam to marry you, then I don't see a meaningful end objective to it. Unless you're telling me, no you're not intending to marry them, you're just, like I said, using "dating" to share Christianity. Because as far as I know, it is VERY hard for a Muslim to renounce Islam in Malaysia. VERY hard. The authorities will make it hell for the would-be apostate. I suspect it would be in fact easier for Indonesian Muslims to renounce Islam, though I stand corrected on this detail. And if you're not even considering marrying them, then they would have even less of an "incentive" to switch to Christianity and risk all that conversion crap that will come their way. Some people in this situation suggest marrying the Muslim girl away from Malaysia, e.g. Australia, which is viable, but the downside is the marriage is not recognised if you intend to go back to live in Malaysia. May I offer a humble a suggestion of dating a non-Muslim girl, such as Buddhists, Taoists or Hindus? If they convert, they don't face official persecution.

Well, sometimes I imagine that one of these days some Muslim terrorist will succeed in carrying out a truly catastrophic attack on a European landmark, and that it will shock westerners awake into actually doing something about the Islamic threat -- but then, I remember what happened here in the US after 9/11 ("Islam is a Religion of Peace!") and I despair.