The Qur'an orders Muslims to violently subjugate Christians and Jews, and to fight them until they pay jizya (tribute money paid in order to acknowledge one's inferiority).

Yet everyone is shocked when Muslims actually do what the Qur'an says. 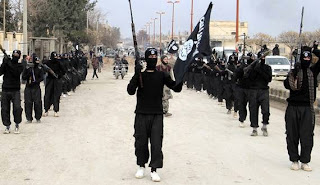 Christianity Today—The nightmare continues for Christians living in ISIS-controlled areas as militants exact brutal punishment for those who fall short of their strict and violent interpretation of Islam.

The AINA news agency is reporting that an Assyrian mother and daughter were raped by militants in Mosul after saying they did not have the money to pay the jizya poll tax for non-Muslims.

The rapes were carried out in front of the father who was so traumatised that he committed suicide, reports Dr Sallama Al Khafaji, a member of the Iraq High Commission for Human Rights.

ISIS has demanded that all non-Muslims pay the jizya tax and abide by strict Sharia regulations.

"The Christians have told me that they cannot pay this tax and they say 'what am I to do, shall I kill myself?'" Dr Al Khafaji told AINA.

There are also unsubstantiated reports that ISIS militants shot and killed four Christian women because they were not wearing veils.

Barnabas Fund said the ISIS takeover may be the "death knell" for Iraq's Christian community, which had already dwindled since the US-led invasion of 2003.

"Having previously sought refuge in Syria, this is no longer an option and as ISIS violence threatens the stability of the wider region, Christians have very few places of safety to which to run," said Barnabas Fund international director Patrick Sookhdeo. (Source)

As per a report from India, Wahhabi preachers are preaching in India on importance of the Sharia law and how it is the only way to save Islam from attacks.

I wonder if Islam is really in danger or is it vice-versa.

Please have your hand on your heart and ask yourself if these people (ISIS, ISIL or Wahhabi preachers etc.) are understanding the Islam correctly and you agree with and there ways will please God.
Whom they want to save - God or Islam?
Is Islam God or God is Islam?

But if you believe that they are cherry picking few things for there benefits and exploiting the religion, then why would any religion should allow such things, infact encourage to do such things.

In both the cases isn't there is some thing which is fundamentally wrong!!!

How can a God be full of so much hatred, pleased with blood, death, rapes in his name for his cause....

Ask yourself, ask hard and deep.

Religion or God - what is the truth?

ISIS are doing exactly what their prophet did ...

Let us pray to all who are under ISIS controlls

at least , they are true muslims :D

Being a Muslim I says ISIS are not muslim these are bull shit groups who just do these because of their own benefit. Islam does not teach us these things ...