Americans have a theory: Take out the tyrant, and democracy will flourish, because people just want democracy. So we invaded Iraq, captured Saddam Hussein, and helped establish a democracy. Things were sure to go swimmingly after that. Yet everyone was shocked to see Sunnis and Shias start bombing each other.

Fortunately, most Muslims don't try to imitate the first generation. But we shouldn't be surprised when some Muslims, whether Sunni or Shia, continue the fighting that began nearly fourteen centuries ago. 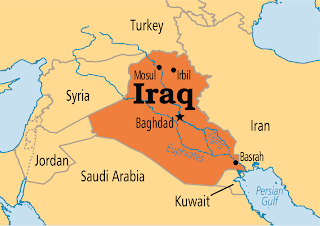 BAGHDAD (AP) — A series of car bombs exploded across Iraq's capital Saturday night, killing at least 52 people in a day of violence that saw militants storm a university in the country's restive Anbar province and take dozens hostage, authorities said.

The attacks in Baghdad largely focused on Shiite neighborhoods, underscoring the sectarian violence now striking at Iraq years after a similar wave nearly tore the country apart following the U.S.-led invasion that toppled Saddam Hussein. Now with U.S. troops gone, Iraq finds itself fighting on fronts across the country, as separate clashes in a northern city killed 21 police officers and 38 militants, officials said.

Hospital officials confirmed the casualty figures. All officials spoke on condition of anonymity because they were not authorized to release details to journalists.

The day began with militants killing three police officers on guard at the gates of Anbar University, a police and a military official said. Islamic extremists and other anti-government militias have held parts of Anbar's nearby provincial capital of Ramadi and the city of Fallujah since December amid rising tensions between Sunni Muslims and the Shiite-led government in Baghdad.

The gunmen detained dozens of students inside a university dorm during their attack, the officials said. Sabah Karhout, the head of Anbar's provincial council, told journalists that hundreds of students were inside the university compound when the attack started at the school. Anbar University says it has more than 10,000 students, making it one of the country's largest.

Ahmed al-Mehamdi, a student who was taken hostage, said he awoke to the crackle of gunfire, looked out the window and saw armed men dressed in black running across the campus. Minutes later, the gunmen entered the dormitory and ordered everybody to stay in their rooms while taking others away, he said.

The Shiite students at the school were terrified, al-Mehamdi said, as the gunmen identified themselves as belonging to an al-Qaida splinter group known as the Islamic State of Iraq and the Levant. The Sunni terror group, fighting in Syria with other rebels trying to topple President Bashar Assad, is known for massive, bloody attacks in Iraq as well often targeting Shiites that they view as heretics. (Continue Reading.)

All of our custom term paper writing service will always be 100% unique and authentic work composed by an essayist on our writing team as plagiarism is a crucial area when it comes to seeking custom dissertation writing services in our firm.

very nice information you share with us. thanks for this.
gmail login

Here you can get some tips about android spy apps. It's important to know in modern world عارف