These doctors could have gone somewhere else, but they chose Afghanistan because they wanted to help people in the struggling country. Their reward for their selfless service? They were gunned down by the guard who was assigned to protect them. 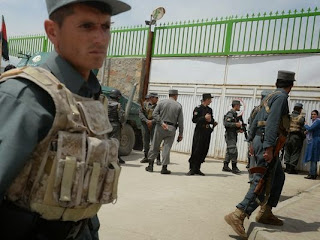 Fox News—The U.S. Embassy in Afghanistan confirmed Thursday that three American doctors -- including a reported father and son -- were killed by an Afghan security guard who opened fire at a Kabul hospital.

"With great sadness we confirm that three Americans were killed in the attack at CURE Hospital," said a statement posted on the Embassy's Twitter page. "No other information will be released at this time."

The shooting was the latest in a string of deadly attacks on foreign civilians in the Afghan capital this year.

Two of the dead Americans were a father and son, Minister of Health Soraya Dalil said, adding that the third American was a Cure International doctor who had worked for seven years in Kabul.

Dalil said an American nurse was also wounded in the attack.

"A child specialist doctor who was working in this hospital for the last seven years for the people of Afghanistan was killed and also two others who were here to meet him, and they were also American nationals, were killed," Dalil said. "The two visitors were father and son, and a woman who was also in the visiting group was wounded."

The attacker was a member of the Afghan Public Protection Force assigned to guard the hospital, according to District Police Chief Hafiz Khan. He said the man's motive was not yet clear. (Continue Reading.)

Email ThisBlogThis!Share to TwitterShare to FacebookShare to Pinterest
Labels: Afghanistan

Of course it was a Christian group that sent doctors to help the Muslims...and what do Muslims do? Kill them.

If you want to help someone poor and downtrodden...go to Latin America and Africa.

Blessings of LORD JESUS CHRIST be with all,
Of coarse the kafir American doctors were waging war in Afghanistan THAT'S why the innocent victimized Afghan guard killed them. You see America that's what you are doing in Muslim world. Killing innocent muslims for no reason and David wood is spreading hate when he post such hate filled news on his blog................
(Or that's what some muslims apologist will say pretty soon )

“the man’s motive was not yet clear” said the local Chief of Police, a predictable piece of taqiyya, Permissible Lying.
The motive is clear, all right.
BBC FOG-MAKING: SOLDIER MURDER IN AFGHANISTAN
http://libertygb.org.uk/v1/index.php/home/root/news-libertygb/5171-bbc-fog-making-soldier-murder-in-afghanistan
WILFUL DENIAL
http://libertygb.org.uk/v1/index.php/home/root/news-libertygb/6141-wilful-denial

I was surprised at how much homework they asked for, so in order to somehow free up my schedule, I started using this Paper Writing Service, which helps to complete written work of any complexity.