Eighty-One Percent of A.M. Readers Know What the Quran Says about Punishing Wives

This was a slightly tricky poll, since all of the answers were technically correct. According to the Qur'an, if a husband fears rebellion from his wife, he should admonish her, banish her to a separate bed, and beat her into submission:


Qur'an 4:34—Men are in charge of women, because Allah hath made the one of them to excel the other, and because they spend of their property (for the support of women). So good women are the obedient, guarding in secret that which Allah hath guarded. As for those from whom ye fear rebellion, admonish them and banish them to beds apart, and scourge them. Then if they obey you, seek not a way against them. Lo! Allah is ever High, Exalted, Great.

Hence, to answer correctly, it wasn't enough to know that the Qur'an promotes wife-beating. Readers needed to know exactly what 4:34 says.

Out of 499 responses, 408 answered correctly that the Qur'an promotes three penalties for real or imagined disobedience. This is significant, because politicians, the media, most of the public, and even most Muslims in the West seem to have no clue what the Qur'an says. Our readers are way above the curve! 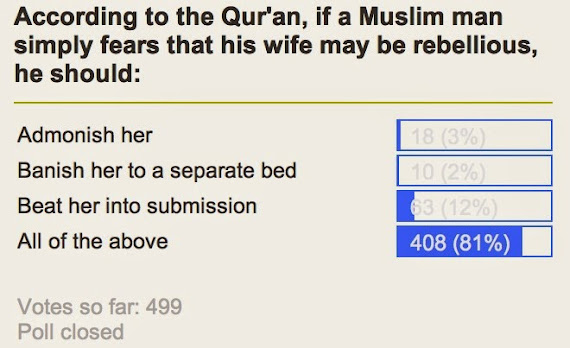 For more on the Islamic view of women, watch this:

But of COURSE our peaceful, pious, god-fearing Muslim brothers and sisters would NEVER try to deceive us..., would they?

Thanks David I just love these polls, I wish there was a place to post these where they would get in the face of the PC MC crowd with the uncomfortable truths.

There is some kind of legitimate online therapy, it helps many people get out of depression, or rather the lgbt marriage counseling near me on this site, are good professionals