Any objections to the spread of Islam are labeled "Islamophobic." Yet it's a simple fact that, as Islam spreads, it becomes more aggressive and confrontational. When Islam dominates an area, non-Muslim groups are ultimately subjugated. Oddly enough, if you oppose the prospect of being subjugated, you are considered a racist and a bigot.

In Great Britain, Christians at New Life Church are so incredibly intolerant that they objected to a Muslim interrupting their church service and telling them to "turn to Allah."


Derby Telegraph—Churchgoers were left terrified after believing a 52-year-old man who walked into their church “dressed like a terrorist” on Remembrance Sunday “might be armed with a bomb”.

Mohamed Dar covered his face with a scarf and his head with a bandana that had the words “God is Great” in Arabic written on it when he entered the New Life Church, in Alfreton.

Within minutes he was shouting how the congregation should “turn to Allah” and that Islam “sent boys aged 10 to war”.

North East and Dales Magistrates’ Court heard how minutes before he walked into the church he had disrupted a Remembrance Day parade at the cenotaph in Alfreton. (Continue Reading.)

At a church service in France, attendees were even more racist and bigoted. They objected to a Muslim laying out his prayer rug and reading Qur'an verses during Mass.


Diversity Macht Frei—The worshippers present at the scene were dumbfounded. This Sunday morning, in a collegiate church full to bursting, a man wearing a djellaba and headgear came to pray. He laid a carpet to the left of the altar, while the Easter mass was underway.

The man, visibly disturbed, read verses from the Koran before writing some lines in Arabic in the parish register. After having caused disruption for the first time during the mass on Palm Sunday one week ago in la Bedugue then in the collegiate church, some worshippers had warned the police.

A team came to ask him to leave the premises, calmly. The deputy commissioner, who had been notified of this disruption to public order, insisted on specifying: "We don't need to generalise. This inappropriate attitude comes from an individual who is clearly disturbed." (Continue Reading.)

Far from being disturbed, the Muslim was kind enough to write out Surah 112 in the church's register: 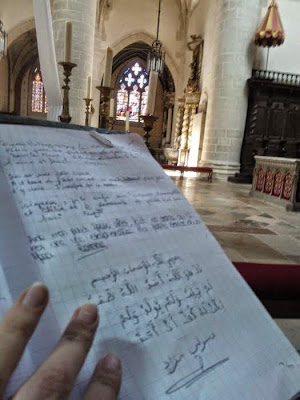 Surah 112 is a warning to Christians. The chapter declares:


"In the name of Allah, the Beneficent, the Merciful. Say: He, Allah, is One. Allah is He on Whom all depend. He begets not, nor is He begotten. And none is like Him."

Can anything be done to stop Islamophobic Christians from objecting to having their church services interrupted in the name of Allah?
Posted by David Wood at 9:24 AM

Wow! Maybe the dhimmified Bishop Mccanus would love to see this and then Pope Francis who thinks Islam is not violent would think of adopting an "open door" policy for Muslims who wish tho lay down their prayer rugs during the celebration of the mass... Afterall we have tho show our " Christ like" attitude and welcome these invading Muslims with open arms.... No?.

God the Father,
God the Son,
God the Holy Spirit.
All Muslim worship and scripture is blasphemy.
Everyone in these churches should be shouting blasphemer, and reconquista at these conquerors.
Islam is profane.
The churches have been defiled.

Revelation TV will be hosting a debate between Anjem Choudary and Alan Craig on April 30, 2014 at 21:00 hrs BST.

Is sharia compatible with the teachings of Jesus?"

The format will be a live one hour exchange and then a further hour where the public are invited to put questions to the debaters via Twitter, email, text or live phone-in.

"Within minutes he was shouting how the congregation should “turn to Allah” and that Islam “sent boys aged 10 to war”."

Given the context, he's actually proud of sending 10-year-old boys to war. Which begs the question: did he fought in a war when he was 10? Or is he a chickenhawk?

Clearly this is all the Christian Isalamaphobes fault.

If only they would of put in a foot bath and prayer area and a side entrance for woman, oh and remove that pesky cross, and take down any images then the Muslim would of been able to pray quietly in the church oh sorry Masjid.

Sorry to say to my brethren in the West, but spirit of antichrist is so influential in the west.

Just look at western movies, tv's, musics etc on how name of our Lord is used in profane way.

People wonder how can gay,lesbian &atheist in majority unite themselves with moslem despite their extremely opposite belief?

They all have one in common: They hate Christ the Son of God !

People have been trying to bring idolatry into the churches forever. Kick them out; forcibly if necessary. Keep the house of God from being polluted.

The Jews are NOT ALLOWED to Pray on the Temple Mount at all.....do we double standards here or what?

The peoples eyes are opening in the UK. All is not lost to Islam yet. The peoples army are marching and will use there most powerful weapon on may 22. In the EU elections. UKIP is a party for the people who want Christianity put back into our schools. Sharia stopped. Hate preachers deported. Every poll has them in the lead. Every one is talking of them. And the British are uniting. Thank The Lord for giving the people commonsense at last.

Why would Christians turn to Satan, the god of the Quran, and who Muslims are unwittingly honoring in the place of God?

Personally to me that is insulting. That is crossing a line. That is offensive jihad. It has begun!. It is completely the fault of the christian islamaphobes who have failed miserably while trying to appease and be accommodating to this vile ideology. I am so angry right now, maybe its a good idea to head to the gym and let off some steam.

I wonder how things would have played out if it had been a Christian disrupting services in a mosque?

I am surprised the congregation was not arrested by police for discrimination....after all they did not reply in kind to the worship of the One true God (sarcasm intended).

Eric, yea, good point. I am wondering the same thing myself. So why are we so tolerant of such nonsense that Muslims are doing but if we serve them their own medicine, we would be arrested for inciting hate, racism and being Islamophobes? I went to meet a Muslim friend and his wife for a catch up and they are probably the nicest people you can ever meet. So why? Why are they Muslims? I pray to the Holy Spirit to open up their hearts to Christ.

You endured two wars to preserve your rightful place in history. If Britain succumbs to this invasion there goes Christian civilisation, forever.