The following is one of Yahya Snow’s favorite questions: 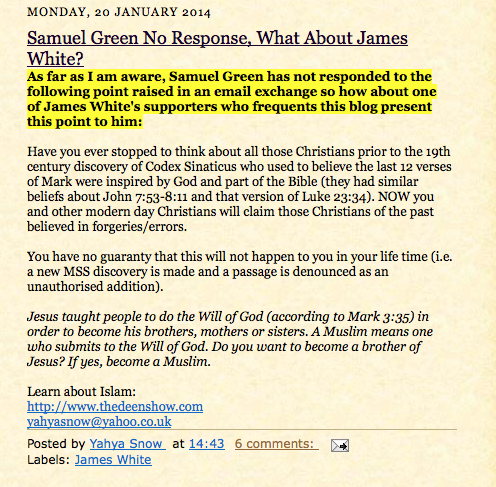 Yahya is so impressed with his question that he decided to turn it into at least three different posts over the course of three months, swapping out the title each time to contribute to the illusion of being more productive than he is and to help mask the still rather obvious truth that the vast majority of his posts are not about substantive issues but consist rather of personal attacks, one of the lowest of which is when he took a stab at Sam Shamoun on the occasion of his beloved Mother’s passing into glory. Here are the screenshots* of the two additional times Yahya posted the same thing under different titles: 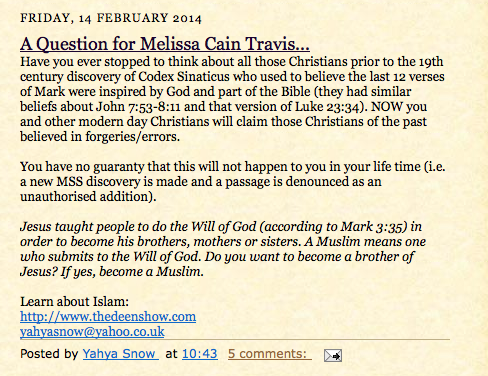 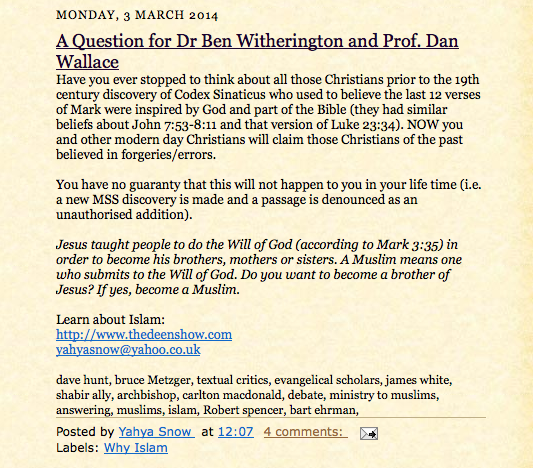 In other words, most of Yahya’s attacks on the Trinity, the Lord Jesus, the prophetic and apostolic writings, etc., are just Yahya duplicating one or another of the handful of articles he has written on these topics, sprinkled in between thinly veiled defenses of terrorism, as well as outright defenses of pedophilia, tongue sucking, timeless erections awarded to Jihadis, and, most frequently, the scores and scores of new slander pieces he cranks out faster than Muhammad picked up other people’s wives and possessions. All of this seems calculated to hide the fact that Yahya doesn’t really have anything of consequence to say on the apologetic front; instead, he mostly spends his time reminding us that he doesn’t like certain people, as if that is a newsflash to those of us who know that Muslims routinely curse Jews and Christians in their hearts and prayers (q.v. Surah al-Fatiha, v. 7, and the commentary of Ibn Kathir).
Now, in answer to Yahya’s question, it would be easy to quote believing textual scholars like Bruce Metzger, Gordon Fee and Daniel Wallace. Upon doing so I am only too sure that Yahya would, as usual, shift his ground and reject anything they have to say, even though he asked them for an answer, pretending all the while that the question was sincere on his part. In fact, I don’t have to guess that this is what Yahya would do since this is what he has done, deleting my responses to hide the answer from his readership, which is admittedly few in number.
Rather than repeat what I pointed out to Yahya before from Wallace and others, and rather than post this on his blog where I am sure it will not scrabble its way to the top of the muddy pond in order to see the light of day – at least not as long as Yahya has his finger on the “abrogate” button, something Allah and Muhammad also found quite useful when writing and redacting the “eternal” Qur’an, not to mention Uthman who committed additional unwanted Quranic material to the flames – I decided I would post the answer here on AM, and this time from Bart Ehrman, who so happens to be Yahya’s favorite unbelieving textual scholar.
In a revised presentation of his review and evaluation of the ECM project, originally presented to the NTC section of the Society of Biblical Literature back in 1997, Ehrman said the following:
19. In my opinion, we need to reconceptualize the task of NT textual criticism. If the primary purpose of this discipline is to get back to the original text, we may as well admit either defeat or victory, depending on how one chooses to look at it, because we're not going to get much closer to the original text than we already are. Barring some fantastic manuscript discoveries (like the autographs) or some earth-shattering alterations in text-critical method, the basic physiognomy of our texts is NEVER going to change. I've been arguing this for several years now, sometimes to the discomfort of my colleagues in the field. But I have to say that this edition does nothing to disconfirm my view. There are masses of data now available for reconstructing the text of James--several times more witnesses than available, for example, over a century ago to Westcott and Hort. How much has this mass of evidence affected the textual complexion of the book of James? ALMOST NONE AT ALL. The two changes of the NA27 text in this new attempt are completely minor. And I should point out, in both cases the text now reads exactly as it did in Westcott and Hort's edition of 1881.
20. A lot of textual scholars have fretted about this as if it were a problem. The concern seems to be that if we can't radically modify the original text, we have no business engaging in this line of work. This view strikes me personally as completely bogus. We can still make small adjustments in the text in places--change the position of an adverb here, add an article there--we can still dispute the well known textual problems on which we're never going to be agreed, piling up the evidence as we will. But the reality is that we are unlikely to discover radically new problems or devise radically new solutions; at this stage, our work on the original amounts to LITTLE MORE THAN TINKERING. There's something about historical scholarship that refuses to concede that A MAJOR TASK HAS BEEN ACCOMPLISHED, but there it is. (Bart Ehrman, “Novum Testamentum Graecum Editio Critica Maior: An Evaluation,” pts. 19-20; italics original, uppercase and bold emphasis mine.)

The above is no different than what I told Yahya can be found in the teachings of Dr. Wallace and others, and it isn’t even something Ehrman recently changed his mind on after further study as is the case on other topics related to the fact that the original disciples and followers of Jesus were convinced by the resurrection and ascension that Jesus is God. As Ehrman says in the above citation, which itself was made as far back as 1997, “I’ve been arguing this for several years now…” Perhaps if Yahya didn’t spend so much time making excuses for terrorists and trying to attack the reputations of others he wouldn’t be so far behind the scholarly curve or get caught so often asleep at the wheel of his studies.

*The reason for posting screenshots rather than links is in part due to the fact that a number of Islamic apologists often take down or alter their original posts after exposure. After this maneuver they promptly deny that taqiyya has any place in Islam, and then they say that their critics have just made up the story because they are Islamophobes.
Posted by Anthony Rogers at 11:26 PM

Here’s what Ehrman says in an interview found in the appendix of Misquoting Jesus (p. 252):

"Bruce Metzger is one of the great scholars of modern times, and I dedicated the book to him because he was both my inspiration for going into textual criticism and the person who trained me in the field. I have nothing but respect and admiration for him. And even though we may disagree on important religious questions - he is a firmly committed Christian and I am not - we are in complete agreement on a number of very important historical and textual questions. If he and I were put in a room and asked to hammer out a consensus statement on what we think the original text of the New Testament probably looked like, there would be very few points of disagreement - maybe one or two dozen places out of many thousands. The position I argue for in ‘Misquoting Jesus’ does not actually stand at odds with Prof. Metzger’s position that the essential Christian beliefs are not affected by textual variants in the manuscript tradition of the New Testament."