Just a few years ago, the Muslim Brotherhood was viewed quite favorably in Egypt. Indeed, after Mubarak was ousted from leadership, Egyptians voted Brotherhood members into the highest leadership positions. Then Egyptians got a taste of orthodox Islam, and now they're sentencing Brotherhood supporters to death by the hundreds.

Sad to see so much trouble in Egypt. I hope the nation can eventually recover from the "Arab Spring." 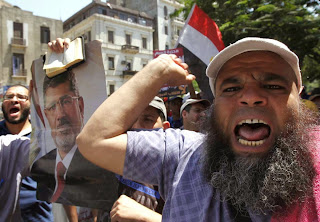 CNN—An Egyptian court has recommended the death penalty for the leader of the now-banned Muslim Brotherhood and 682 supporters, state television said Monday.

The same court also handed down a final capital punishment ruling for 37 others.

Charges in both cases, which were tried by the same judge, are related to violent riots in the central Egyptian city of Minya in August, including the murder of a police officer.

Mohammed Badie, the Brotherhood's general guide, is among 683 supporters of ousted President Mohamed Morsy whose death sentences are not final -- as the case has been referred to the nation's grand mufti, Egypt's highest religious authority, for review.

In the second case, relating to 529 Muslim Brotherhood supporters sentenced to death last month, the judge upheld 37 death sentences. The rest saw their sentences commuted to life in prison.

Most of the people sentenced are being tried in absentia. All defendants are still permitted to appeal. (Continue Reading.)

you christians never satisfied then and now

"Just a few years ago, the Muslim Brotherhood was viewed quite favorably in Egypt. Indeed, after Mubarak was ousted from leadership, Egyptians voted Brotherhood members into the highest leadership positions. Then Egyptians got a taste of orthodox Islam, and now they're sentencing Brotherhood supporters to death by the hundreds."


Knowing what i know, can't argue with that abridged version. But mainstream media can, and from what i've seen most of them have no problem implying the Egyptian army were butthurt after Mubarak was ousted so they did another coup and are now murdering political opponents in full dictatorship mode. They made no mention of the 539 death sentences commuted to life in prison either.

"Sad to see so much trouble in Egypt. I hope the nation can eventually recover from the "Arab Spring." "

My feeling exactly. Egypt has a long and rich history and the Egyptian people deserve better than becoming another Pakistan or Afghanistan.

"you christians never satisfied then and now"

Now, do you have any evidence to back your claim about christians? Because from what i know about christianity i can only believe that the overwhelming majority of the Christians in the world (including all the Copts in Egypt) would prefer that all those MB terrorists sentenced to death would instead live and let live. But that was not the path they chose, was it? Sorry, i meant that allah choose for them. I wouldn't want to insult you by implying that something may happen without allah willing it so.

What purpose will condemning all these people and executing them serve?
It may make a few people feel safe, but it doesn't eliminate the threat Christians and non-Muslims face in Egypt.
It won't make Egypt a more civil or tolerant society certainly.
Forbidding the MB to exist is a powerful step that might work. To drive it underground is to make life very difficult for its members.
Will the Egyptian government really kill all these people?
That's the question that keeps running through my mind.