Maybe some day we'll be allowed to talk about what Islam teaches about women (without being called "racists," "bigots," or "Islamophobes"). In the meantime, it seems that, in order to be tolerant, we have to sit back and do nothing while women are beaten, raped, and killed. 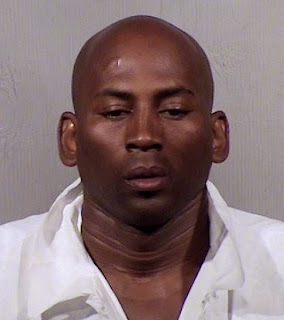 Avondale, Ariz. - Police say a valley man threatened to kill his wife, telling his victim "Islamic Law" gave him the right to kill her.

Ansar Muhammad, 43, is facing several charges, including assault and imprisonment.

According to the police report, on April 26, Muhammad sexually assaulted the victim, held her against her will while threatening to kill her, punched and strangulated her, causing physical injuries at their home near 112th Avenue and Encanto Boulevard.

Police say the victim fled to a neighbor's home to call them after the suspect fell asleep.

Muhammad was detained outside his residence upon police arrival and refused to make any statements.

In the report, police say their investigation determined that Muhammad and the victim were arguing about her having an affair when "Ansar picked the victim up, carrying her like a baby and put her in their vehicle against her will." He then proceeded to drive to the rear of a nearby Walgreens store where "Ansar began to assault the victim by punching her multiple times, leaving physical injuries on her face, neck, back, chest and legs."

When the victim continued to try to get away and told him to stop, police say he told the victim he was going to kill her because he had the right due to his "Islamic Belief."

The victim told police Muhammad then drove back to their home and threatened to throw her in a lake because she can't swim. When they arrived at the residence, Muhammad told the victim to remain quiet and not wake their three children before taking her phone, per the police report. (Continue Reading.)

Email ThisBlogThis!Share to TwitterShare to FacebookShare to Pinterest
Labels: Sharia, Women in Islam

He is right, Islam sanctions beating ones wife even if he "SUSPECTS" she 'WILL' disobey him in anything. (Sura 4 of the Qur'an) Islam also sanctions killing a woman ACCUSED of adultery as there is no burden of proof in Islamic law, just the strength of the allegation, and women are NOT allowed to testify in their own defense on sexual matters. Even if they were allowed to testify, their testimony is considered half that of a man. Sharia law, which enforces Islam, allows such abuse and murder. Islam is a domestic violence abuser's dream. Thank the God of the Bible (Mohammad's allah is NOT the God of the Bible) that we still have the Constitution as the supreme law of the land...