CNN posted a short clip about a six-year-old girl being married off in Afghanistan. Fortunately, the little girl was rescued and returned to her father (thanks to a Western group that focuses on helping Afghan girls).


What CNN apparently still doesn't know is that this "inhumane and cruel tradition" is thoroughly grounded in the teachings of Islam.

According to the Qur'an (Surah 33:21), Muhammad is the pattern of conduct for Muslims. But Muhammad himself married a child-bride:


Sahih al-Bukhari 3896—Narrated Hisham’s father: Khadija died three years before the Prophet departed to Al-Madina. He stayed there for two years or so and then he wrote the marriage (wedding) contract with Aishah when she was a girl of six years of age, and he consummated that marriage when she was nine years old.

Sahih Muslim 3310—Aisha reported: Allah’s Apostle married me when I was six years old, and I was admitted to his house when I was nine years old.

Sahih Muslim 3311—Aisha reported that Allah’s Apostle married her when she was seven years old, and she was taken to his house as a bride when she was nine, and her dolls were with her; and when he (the Holy Prophet) died she was eighteen years old.

Sunan Abu Dawud 2116—Aishah said: The Apostle of Allah married me when I was seven years old. (The narrator Sulaiman said: Or six years.) He had intercourse with me when I was nine years old.

As if Muhammad's example weren't bad enough, the Qur'an specifically allows Muslim men to divorce prepubescent girls after having sex with them.

In case there is confusion about the meaning of this verse, here are three classic Muslim commentaries and one modern commentary on Qur'an 65:4:

Tafsir al-Jalalayn—And [as for] those of your women who (read allà'ï or allà'i in both instances) no longer expect to menstruate, if you have any doubts, about their waiting period, their prescribed [waiting] period shall be three months, and [also for] those who have not yet menstruated, because of their young age, their period shall [also] be three months.

Tafsir Maududi—Here, one should bear in mind the fact that according to the explanations given in the Qur'an the question of the waiting period arises in respect of the women with whom marriage may have been consummated, for there is no waiting-period in case divorce is pronounced before the consummation of marriage. (Al-Ahzab: 49). Therefore, making mention of the waiting-period for the girls who have not yet menstruated, clearly proves that it is not only permissible to give away the girl in marriage at this age but it is also permissible for the husband to consummate marriage with her. Now, obviously no Muslim has the right to forbid a thing which the Qur'an has held as permissible.

Hence, in condemning Islamic child marriage, CNN has condemned both Muhammad and Allah. We couldn't agree more. But CNN refuses to address the Islamic component of child marriage. As long as Western journalists continue to speak out against a practice while cowering in silence about the cause of the practice, they'll never get to the root of the problem, and child marriage will go on. 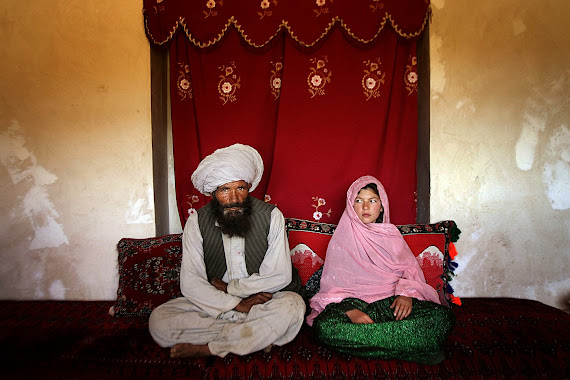 I totally agree, I think CNN are cowards....if muhammed is the example for all mankind....and he married a little 6 year old child.....then come on Muslims, just admit this is wrong...or if you think it's ok then I would love to hear your comments on that....but there is only 2 choices here ...either it is ok to marry little girls or it's not.....it can't be both...so what is it Muslims?..

Here is a conversation I recently had with a Muslim...
Me: is it ok to marry girls younger then the age of 16
Muslim: no it is not ok the girl should be past puberty and no younger than 16.
Me: then why did your prophet muhammed marry a little girl when she was 6 years old and consummate the marriage when she was 9 years old.
Muslim: the ages are not totally accurate.
Me: then you don't believe the authenticated Hadiths on this?
Muslim: Allah allowed him to do that because she was going to keep the teachings of Islam spreading.
Me: so it took a little 6 year old girl to spread the teachings of Islam and that is the only way Allah could keep these teachings going....really, not a very powerful God you have there at all.
Conversation over.....

I commend your courage, Cheryl Maree --

1) unless you were out of your neighborhood, (2) the Muslim you spoke to does not know where you live, (3) you are not likely to run into him again on the street ---

Responding "NO" to any of those 3 things, would mean (seriously) being careful and watchful of whom you encounter.

If you do not already have some personal defense measure at all times, buy pepper spray and learn how to use it.

@SteveDowling
I see the Muslim all the time, Daivid Wood knows of who I am referring to, David has even spoke with him.

Matthew 10:28 And fear not them which kill the body, but are not able to kill the soul: but rather fear him which is able to destroy both soul and body in hell.

" Fortunately, the little girl was rescued and returned to her father"

Who married her off to pay a debt.


"(thanks to a Western group that focuses on helping Afghan girls)."

For helping that little girl they've won a spot on SPLC's next year list of ""islamophobes. Probably alongside CNN, for the "inhumane and cruel" comments.

Muslims like to claim that if certain OTHER Muslims do anything unfavourable to their eyes, they would say that other person is "extremist", politically motivated, or have hijacked Islam. I met a friendly Muslim man recently who just got back from his umrah in Mecca. He got to talking about Islam and said Islam "never taught Muslims to hate people of other faiths." He must have been taught Surah 2:256 but right away Surah 9:5, 9:29, 9:30 and the abrogation effect jumps to my mind, though because it was supposed to be a business appointment I did not point that out to him. So yes, people keep saying "Islam didn't teach this, Islam didn't teach that"...we say, really? Let me show you...

I can't watch the video. It says, "Video could not be initialized." Tried refreshing several times but it still won't work

There's a piece in the Telegraph today on Iraq legalizing child marriage from the age of nine. And consummating the marriage. How can people treat little children this way

I totally concur with the statements decrying western msm media's seeming refusal to speak out and condemn anything concerning Islam.
Without going off-topic one moment, this is evident with every item concerning its founder beginning "the prophet..."this is a declaration of faith and not a statement one hears preceding any reference to Jesus, (eg. "The Christ"), nor objective, balanced reporting.
More correctly, I wish to hear "the islamically - held 'prophet' Muhammad" or even (the historically-debatable) "Muhammad ibn Abdullah bin Muttalib, founder of Islam".
Back to issue, media ought to not merely report child marriage as being fully-sanctioned, even to pre-pubescent girls, by Islamic scholars, but its confessionally-sanctioned polygamy, failure to recognise civil marriages as 'un-Islamic', and thereby an already-married non-muslimah, or wedded woman of Judaeo-Christian faith as unmarried and, though 'not recommended', deemed 'marriageable' by a Muslim male.
Further, let us expose the practice of 'muta nikah' or temporary marriage as still fully-sanctioned by Islam. So long as the 'aqd' or 'sigha' - the marriage contract - is agreed, and agreed 'dowry' paid the woman upon being 'divorced', possibly after a single 'wedded night', by 'ijab' - a verbal declaration of "I divorce you" three times, this is nothing but Islamically-legislated prostitution.
However, government and legislators appear naively content to convince themselves and the public that non-Islamic or non-Sharia judicial and civil laws are seen as 'binding" to adherents of Islam.

I wholly support others unafraid to speak-out openly about the truth concerning Islam.

Please read that, thanks :D

ALSO Bad concepts are ok if they are done in name of allah.
For example: child marriage, killing, lying, torturing an animal and most importantly non muslims can be treated worse than animals. How would Muslims like it if non muslims treated them same way? Think on it!
BUT in Spanish Inquisition and 18th and 19th century northern India ONLY that method worked after suffering for 700 years at the butchery of Islam. Butchery was so bad that a religion had to be created to COUNTER it. It still exists and is called SIKHISM. Imagine a religion was needed to save INDIA from going the way of all other countries from Buddhism, Christianity and Zoroastrianism.

Family Law Solicitors Near Me dofollow Islam and its teaching

Have you ever thought about surprising your partner as well? By a new hairstyle for example. Anyway, my friend is a hairdresser, always looks great. You are always looking on the Internet for something new in the world of hairstyles. Recently found an article https://lovehairstyles.com/curly-pixie-cut/. Here you learned the best tips about curly pixie cut. That's cool.