The Tragic Ending of a Bad Beginning

In some of my previous dust-ups with on-again, off-again, on-again(?) Muslim Paul Williams, I criticized what appeared to me to be his very uncritical acceptance of one possible but extremely tenuous way of accounting for the relationship between the Synoptic Gospels (i.e. the Four-source hypothesis, which includes postulating the existence of a “Q” source to which Matthew and Luke had access and used in addition to Mark), which he seems to accept largely because he believes it enables him to make a more persuasive case against the reliability of the apostolically derived doctrine of Christ’s deity. Throughout our discussion the only thing he offered in support of his view is the fact that this view currently dominates the field of critical scholarship. Since I have long since gotten past any need to follow the crowd (Exodus 23:2), even if it constitutes a significant contingent of the current intellectual elite (Acts 5:27-32), I did not then and do not now feel even the slightest temptation to embrace this view if this is all it has going for it.

Of course the scholars whose authority PW all too often appeals to know better than to rest their arguments on appeals to their own authority, but that doesn’t mean I am persuaded by the “evidence” or “arguments” they offer. They may not ordinarily be guilty of committing the sophomoric fallacy of argumentum ad populum, though they are not always above doing so either, but this isn’t the only fallacy on the books or the only way a scholar can take a false turn. Just as those who currently make up the critical guild approach the Bible in a (hyper-)critical fashion, so I am obliged as a Christian to approach their books in a spirit of critical enquiry. As of yet, while I do not flippantly dismiss or rule out the Four-Source theory and have on occasion even used the theory to show it doesn’t really support PW’s case against the deity of Christ or any other article of the Christian faith, I simply do not believe the case so far offered by critical scholars is sufficient to overturn all the evidence for the long-standing tradition of the Church that not a few eminent scholars still faithfully defend.

With that in mind, I recently noticed that PW has finally presented what he takes to be evidence for the Q theory. Unfortunately, what PW calls evidence fails to be anything more than an illustration of the problem and an assertion of his proffered solution, at least as stated. Here is what PW presented as evidence: 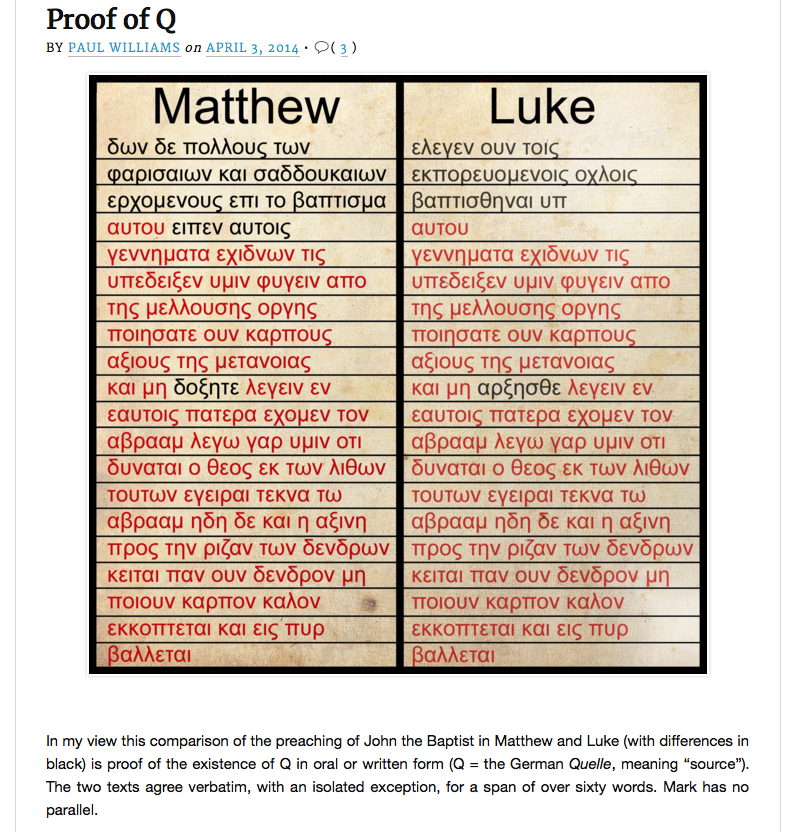 As said, all the above does is provide material that illustrates the reason there is a Synoptic question. As presented by PW, the above does nothing to provide evidence for any one of the various answers that scholars have offered. What the above shows is that Matthew and Luke say something very similar. It does not demonstrate the origin of this similarity, least of all the one PW likes.

According to the theory PW favors, since material like the above is not found in Mark but is found in Matthew and Luke, it is contended that Matthew and Luke had access to and independently made use of another source called “Q”. But this is only one of many possible solutions. For example, even if we assume Markan priority in this case for the sake of argument, such that all triple-tradition material is viewed as being derived by Matthew and Luke from the Gospel of Mark, this does not require postulating the existence of a “Q” document in order to account for double-tradition material, i.e. material found in Matthew and Luke that is not also found in Mark. To mention one alternative possibility for why Luke says exactly the same thing as Matthew in the above case, perhaps instead of getting it from a hypothetical document that no one in the modern world has ever seen and no one in the ancient world ever mentioned, Luke got it from Matthew. Or perhaps it was the other way around and Matthew got it from Luke. To state the obvious, the latter possibilities are much simpler and more elegant than the “Q” theory, for hard evidence of the existence of Matthew and Luke are available on all hands while hard evidence for something called “Q” could fit on the end of a Q-tip with plenty of room leftover.

Interestingly, the above possibilities were actually brought up to PW in the comments section on his blog. In response PW directed his interlocutor to a Wikipedia article where these possibilities are supposedly refuted. Here is the most directly relevant part of what this article says:

THE ORIGIN of the double tradition, as well as the major and minor agreements, is a key facet of the synoptic problem. The SIMPLEST hypothesis is that Luke has used Matthew, or vice versa. But many experts, on various grounds, hold that neither Matthew nor Luke made use of the other; if so, it is then argued, they must each have drawn from some common source, distinct from Mark, which provided the double tradition material and overlapped with Mark's content where the major agreements occur. This hypothetical document is termed Q, for the German Quelle, meaning "source".* (Emphasis mine)

To the dismay of PW’s theory, this source acknowledges that Q is not the simplest solution. The only reason one could possibly glean from this article for preferring the “Q” solution is that “many experts” hold to it. The source mentions that these experts offer “various grounds” for believing in Q but it does not provide them. But that is what PW was asked to provide, and that is what PW suggested the Wikipedia article does for him. In other words, PW’s fallacious appeal to authority is grounded on another fallacious appeal to authority. What is perhaps even worse than this is the fact that the only source attached to the above comment in the Wikipedia article, i.e. footnote “20,” directs the reader to pages 145-146 of scholar Mark Goodacre’s book The Synoptic Problem: A Way Through the Maze. And yet, as the very title of the chapter in which these pages are found in Goodacre’s The Synoptic Problem indicates (i.e. “6. The Case Against Q”), this authority believes the evidence tells against Q. Suffice it to say this is a tragic way for any appeal to authority to end.

For those who are interested in reading more on this issue, in addition to the above chapter in Goodacre, see his contribution to Questioning Q: A Multidimensional Critique. He also has an entire book on this subject titled – The Case Against Q: Studies in Markan Priority and the Synoptic Problem. In addition, online resources are available on a companion website for the latter book.
Posted by Anthony Rogers at 6:15 PM

It seems to me that the simplest explanation is that Matthew wrote first and later Luke and Mark adjusted the content to suite their different target audiences adding their own information along the way.

The biggest unspoken presupposition for the four source guys is the assumption that simpler equals more primitive and earlier in time. This is nothing but 19th century evolutionary thinking from biology wedged into a unrelated field.

Thanks Anthony. As you say it is helpful to remember that it is a synoptic question not a synoptic problem.