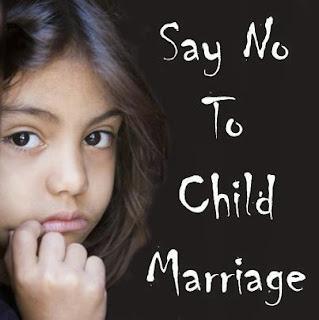 According to Islam, Muhammad is the pattern of conduct for Muslims (see Qur'an 33:21). Muhammad married a young girl named Aisha and had sex with her when she was only nine years old. The result of Allah affirming Muhammad as the ultimate pattern of conduct is that Islam will never be able to stop child-marriage.

Not surprisingly, the less Westernized a Muslim country is, the higher the rate of child-marriage. Afghanistan is among the least developed Muslim countries (thanks primarily to the Taliban turning back the clocks on what was once a rapidly developing nation). A recent study showed that approximately 60% of girls are forced to marry as children.

LOS ANGELES, CA (Catholic Online) - A new report on human rights in Afghanistan released by the U.S. State Department reveals that girls as young as six can be "married" away or betrothed and are the victims of frequent sexual abuse from older men, sometimes within their own families.

Although the Taliban have a reputation for religious conservatism, that conservatism does nothing to protect women and girls from the sexual depredations of men. Women and girls are commonly victimized and those that speak out are likely to be blamed themselves, regardless of age differences.

Afghan law requires that girls be 16 before they can marry and boys 18. Such laws are rarely respected and about 60 percent of all girls are forced to marry before 16. Since most of the marriages in Afghanistan are unregistered and few people even have birth certificates, it is virtually impossible for the government to enforce the law.

Other Afghan laws designed to protect women from abuse also have little enforcement.

In 2013, incidents of rape also increased in Afghanistan. Most of the victims were children. (Continue Reading.)

If this keeps up Muhammad might well become the Patron Saint of paedophiles everywhere.

But here Christ warns the offender,

“It would be better for him if a millstone were hung around his neck, and he were thrown into the sea, than that he should offend one of these little ones.” Luke 17:2

That is, for his OWN sake, BEFORE he causes the offence.

Syed Sye, you seem to have missed the big picture, which was already pointed out long ago.

“God’s wrath is greatest when he removes his Word or permits people to despise it. When the Greeks despised his Word, he took it away and gave them the Turk and Mohammed; to us Germans and to the Italians he gave the Pope and with him all sorts of horrible things – the denial of the faith, for example, and the entire papacy.”