If this were a matter of civil rights (the rights that protect us from government interference), I would have to side with the Muslim family. Apart from relevant circumstances (safety issues, etc.), the government cannot stop people from praying. But this isn't a civil rights issue at all. The Empire State Building is a privately owned property, so if the managers don't want people on the floor praying, people aren't allowed to be on the floor praying. (Similarly, if you decide to take up aisle space to pray in Wal-Mart, the manager can ask you to leave, because it's private property.)

The family is suing the Empire State Building management company (and the guards) for $5 million. Seems like more Sharia "lawfare" to me. Any thoughts? 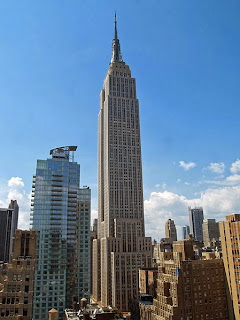 New York (CNN) -- A New York family's hope for an enjoyable outing high atop Manhattan ended abruptly when the group was escorted out of the Empire State Building for saying Muslim prayers, according to a lawsuit.

Fahad Tirmizi, his wife, Amina, and their two young children were at the skyscraper's observation deck last July 2 shortly after 11 p.m., a time when the family's "religious beliefs require them to recite the evening prayers wherever they may be at the time," according to a lawsuit filed in Manhattan District Court on Tuesday.

The couple silently knelt in an isolated area of the observation deck, with little foot traffic, the court document said.

While she managed to pray without incident, one guard interrupted and "menacingly poked" Fahad Tirmizi "with his hands and feet several times in various parts of his body," the court document said.

The guard informed Tirmizi he was not allowed to pray while at the observatory, and then "forcibly" escorted his family to the ground floor exit of the building, according to the court document.

The suit names the publicly owned Empire State Building management company, the security firm, and two unnamed security guards as defendants, alleging that they violated the first and 14 Amendments as well as multiple state and city civil rights laws.

In response, an Empire State Realty Trust spokeswoman, Brandy Bergman, told CNN Wednesday, "The claims are totally without merit and we will respond to them in court." (Continue Reading.)

This sounds like a very standard black and white case. The Muslim family has no chance if the Law is executed correctly.

The only way then for this to go the Muslim way is if the Judge is a politically correct, pro-Islamist or someone of higher political authority makes sure they win.

This is outrageous! The ongoing hue and cry of Muslim victimhood in the west getting louder and louder, and we seem to be giving in to their constant demands. Even though we know that they are always looking for ways to make a quick buck at the expense of the kuffar.

If the intent of these Muslims were pure, they would know not to go on an high-rise building excursion so close to their prayer time. But we all know why a Muslim decides to hypocritically pray out in the open. It is more of a show of piety than sincere worship, and serves another sinister purpose, which is to mark their territory.

Once a Muslim is allowed to pray at a certain location, that area gets designated to Muslims only and becomes like a mini mosque. The area will then be cordoned off, and eventually no kuffar will be allowed to 'desecrate' it with their presence.

Even though the ESB may be privately owned, I have a nagging feeling that this Muslim family is on the road to riches, just because Muslims have a reputation for altering the skyline of cities,(NYC can certainly vouch for that fact)so the ESB owners will not risk it.

Only recently, singer Katy Perry succumbed under the pressure of outrage of the Muslim masses, I have a feeling the owners of the ESB, would not want their multibillion dollar asset turned into rubble, so a few million out of the ole kitty and a designated area for them mozzies is but a small price to pay.

I hope and pray that the owners of the ESB stand up against the demands of the followers of this evil ideology, and win this battle. Someone's got to put a lid on this nonsense.

"Where have all the good men gone
and where are all the gods?
Where's the streetwise Hercules to fight the rising odds?..."
Bonnie Tyler

Greetings in Christ!
Just to inform Americans, the timing mentioned in this report for Islamic prayer is for ISHA (last prayer of the day) and no matter where one lives in USA it is never at 11 p.m. ISHA prayer this late is already QAZA (LATE) which means that one can say their prayer ANYTIME before FAJAR (the morning prayer at sun rise). So this family was in no way obligated to say their prayer right then and there , unless the obligation was to say their prayer on top of Empire State Building or to shove Islam in the face of America. And of this is what the government of USA is going to allow then they should not fight Islamic terrorism because that's what the jihadists want to. This is what Al-qaida is fighting for, an Islamic world with sharia implemented in it. I bet if I was praying to my lord I won't be escorted out. They just might throw me off the building all in the name of separation of church and state. I can't wish anyone merry Christmas because it can offend someone but a Muslim praying with his bum in my face (and believe me that's what it looks like, I am from a Muslim country) , an ideology that calls me names, compares me to pigs, justifies my murder and my family's, shouldn't offend me.....its really sad.

We all must unite to stop islam, these evil miscreants can not be allowed to turn our beautiful nation into the third world backwaters they crawled out of! America and Europe need to wake up to this menace and unite in CHRIST!!!!!!!!!!

Children law process of law also handle frequent conditions concerning offender legislation, property or home connected legislation, probation law, trusts, and so forth. Nevertheless, most of the conditions which come to help frank byers decatur il process of law include the separation and divorce, separating, neglect or even child custody conditions. Many specifics need to be regarded as on the subject of these kinds of conditions.

I like what TPaul said particularly, if these people are really sincere, they would know better than to visit the ESB so close to their prayer time. I pray the judges use a bit of common sense in this and just throw the case out. And yes, if this case goes the Muslim way, that spot where they supposedly prayed would become THEIR spot. And what Saroosh said is even worse. Really, if they ignore the Muslims it would be a victory not only for NYC but also for common sense.

How could these Muslims think that we will believe that praying to and honouring the devil, the god of the Quran and Islam, would be worth five CENTS let alone 5 million dollars?