According to a study by the Organization for Economic Co-Operation and Development, eleven of the twelve countries ranked most oppressive towards women are Muslim-majority countries. Coincidence? Certainly not. But if you speak out on behalf of women in these countries, you will be labeled a "racist" by people who want the oppression to continue. 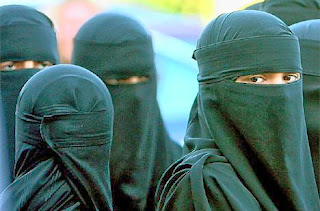 Gulf News—Health authorities in Saudi Arabia have launched an investigation into a claim that a woman had been refused medical assistance in the absence of a male relative.

Dr Salma Al Shihab reportedly made an urgent call requesting a Saudi Red Crescent ambulance to take her to hospital, but the operator upon learning that she had no male relative with her told her that they could not send her the vehicle.

The patient said that she felt an acute pain early in the evening, but she thought that it would gradually disappear.

However, by 4am, she could no longer stand the pain and had difficulties speaking or moving her head, local Arabic daily Okaz reported on Tuesday.

Unable to go out at that time to look for a taxi, particularly that she lived alone, she called the Red Crescent Society.

The operator asked a series of questions about the symptoms and the location of her home.

When she informed him that she lived alone, he reportedly told her that they could not send an ambulance to a woman who did not have a male relative with her.

Salma added that the operator asked her to wait for some time before he resumed the conversation to tell her there were no instructions to dispatch ambulances to women without male relatives.

“At that moment, I recalled asking myself if we women should die in such cases,” Salma said. “I used my mobile to look for a vehicle that would transport me to hospital and I eventually reached the medical facility after 15 minutes. On my way, I did get several phone calls from fixed lines, but I was not in a physical condition to answer them,” she said.

Ahmad Al Anzi, the spokesperson for the Red Crescent in the capital Riyadh, said that they offered services to all people regardless of their race, background or gender.

“We will look into the complaint submitted by the Saudi citizen,” he said. (Continue Reading.)

For a brief introduction to Islamic teachings about women, watch this:

What a shame they took the cross away and made it crescent. Poor women too - I hate women who wear these outfits in UK and cause the suffering of other women around the world.