In a horribly inaccurate article on the counsel of Nicaea that Paul Williams pilfered from the “Biblical Unitarian” (I know, pardon the oxymoron) website, we are told that, “the doctrine of the Trinity was rammed through by Athanasius (who in the future would use strong-arm tactics that would make a modern day mobster proud)…”

While clearing the good name of Athanasius is worthy of a blog post – a post that would involve asking: How are Athanasius’ (alleged) actions subsequent to the council of Nicaea supposed to ground or warrant the claim that he “rammed” the doctrine of the Trinity through at Nicaea, and all that at a council he wasn’t even allowed to play any significant role in since he was not a bishop at the time? – that is not the immediate concern of this post.

What interests me at the moment is the following question someone put to PW and how PW answered it: 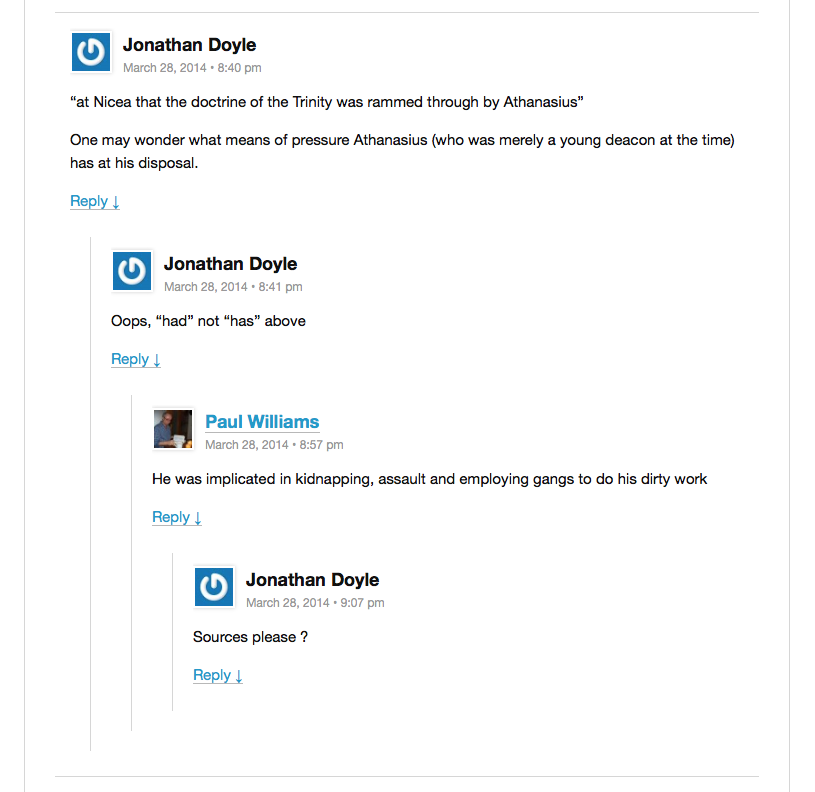 Here is what I find so interesting about this. PW still seems to suggest in various places that he has no problem with Islam’s paternally-challenged idol-god, i.e. Allah, or with the idea that his enforcer, i.e. Muhammad, who literally rammed him through the Arabian peninsula, is a prophet. Evidently the evil life that Muhammad lived, which easily trumps in the evil category anything falsely imputed to Athanasius, didn’t play a role in PW’s decision to defect at all. In fact, PW doesn’t even appear to think Muhammad lived an evil life, even though his lifestyle included (and went WAY beyond) "kidnapping, assault, and employing gangs." PW’s only stated reason for turning from Allah and Muhammad is that the two of them wanted him to eat less and get up too early. In other words, the Trinity is suspect for PW because Athanasius (allegedly) did things that would make a modern day mobster proud, but Muhammad’s new-fangled unitarian deity is not suspect even though the list of enormities committed by Muhammad at the behest of the spirit he worshipped would make an amalgamation of the five worst mobsters in history look like the greatest saint to have ever lived.

PW might be an apostate from Islam, but he is still just as inconsistent as ever. He is living proof that you can take a person out of the religion of inconsistency, but you can’t take the love of inconsistency out of the person.
Posted by Anthony Rogers at 7:49 PM

His whole blog is now devoted to slandering Christianity and Christians.

A man that is an heretic, after the first and second admonition, reject; knowing that he that is such is subverted, and sins, being condemned of himself. Titus 3:10

Paul Williams is just taking a Gay Break from his Pauline Islam.

Yup..! Very much encouraged..! Please do a show about the council of Nicaea on trnity channel... I'm quite sure many didn't acknowledge what has happened durring the council. Yes there are so many sources online we can check out. But we prefer live interactions & clarifications, didn't we? It's easier to digest... TQ

Agreed!! A show needs to be done about the Council of Nicaea.. I think an appearance with Dr James White would be great!!

I wrote a response to Paul's article.