A Muslim named John Smith was watching our "Top Ten Reasons Muhammad Is Not a Prophet," and he decided to respond to some of our points.

As one of our points, Sam and I showed that, even though the Qur'an claims that Muhammad is mentioned in the Torah and the Gospel, he isn't mentioned at all (except, of course, as a false prophet). John responded by positing imaginary books of the Bible:

Perhaps Muhammad is mentioned in these imaginary books:

John decided to continue his point by claiming that the Bible must have been corrupted, since the age of Moses is clearly wrong:

Then he said that the same points we're using against Islam would also apply to the Bible (with Sodom and Gomorrah being his only example, even though I can't figure out which of our Top Ten Reasons this was supposed to parallel). Nevertheless, his point would be settled by spitting in our faces:

After making a brilliant defense of Muhammad's suicide attempts, John invited Sam to murder me: 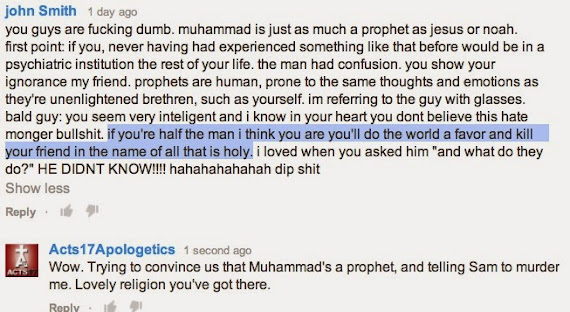 As usual, however, things ended on a happy note:

Amen brother, Praise the name of our LORD Jesus Christ

we can only pray for these innocent souls.

Another one to pray for. May the peace that surpasses all understanding somehow break through to him.

I think the part that hit me the most and got me rethinking everything I believe is when he said he is going to spit in your face. I can't really explain it, but at that point the lights went on for me. All this time I have been waiting for a verse in the Bible that mentions Muhammad like the Qur'an says I should be able to find, when what I really needed was to hear a good solid (liquid?) threat.

Compared to any other well-known religions in the world right now,

the nastiest comment being spilled out by a religious leader we will ever hear, can only be found in Islam

Notice the background, this is not personal prayer but MASS PRAYER in a mosque with at least 200 attendees , all of them jointly praying with the Imam who is leading them in giving nasty&horrific curse over their enemies.

It's more become clearer, Islam is not human invention , it's obviously SATANIC !

How can someone like Smith say, “in the name of all that is holy”, and at the same time spout all those profanities, and advise someone to murder their friend for no reason?

He is obviously not serving the Righteous Holy Creator, but an unholy god/devil, i.e. Satan.

Easy enough to see because,

“Beware of false prophets, who come to you in sheep’s clothing, but inwardly they are ravenous wolves. You will know them by their fruits…” Matthew 7:15

Smith has been completely deceived by the Islamic doctrine, and which is quite obviously a doctrine of demons, with no salvation for its followers.

Now the Spirit expressly says that in latter times some will depart from the faith, giving heed to deceiving spirits and doctrines of demons, speaking lies in hypocrisy... 1Timothy 4:1

There is salvation in ONE name only, and it is NOT Muhammad or the god of the Quran (600 years AFTER Christ).

Nor is there salvation in any other, for there is no other name (Jesus Christ) under heaven given among men by which we must be saved. Acts 4:12

Lovely people. I stopped to speak to a mohammedan dawa moron who knew nothing about his religion a while ago and he wanted to hit me. They are all cowards - they only ever do dawa in pairs or more because one shouts at you while one rattles off some rubbish that isn't even related to what you are saying to them.

A bit off topic David but why are muslim countries banning the Noah movie?

@Young Steve - “in the name of all that is holy”. I missed that part. Maybe you should send him the video posted a while ago that there is no such thing as "holy" in islam.

Apologies for the multiple comments this morning but why are mohammedans scared of debating Sam?

Do not speak to fools, for they will scorn your prudent words. Proverbs 23:9

So how can Satan, the adversary and deceiver, use a lost soul like John Smith to get at and harm Christians? Certainly not by turning us away from doctrine. If there is an attack here, it will be a deceptive "rope-a-dope" -- the visible victory over John Smith would hide the real attack.

Matthew 5:44 - But I say unto you, Love your enemies, bless them that curse you, do good to them that hate you, and pray for them which despitefully use you, and persecute you.

Let's also pray daily for David and Sam, asking God to sustain and guide them as they with truth and love confront the deceivers and the deceived. "Blessed are you when they revile and persecute you, and say all kinds of evil against you falsely for My sake." Mt 5:11

@ David Wood
Hey Man I Dont understand One thing Muslims Dont believe their Own Book!
When ever I Show them verse IN THEIR OWN QURAN.They say Oh You know that verse was for a particular period not for us.... ?? What is this ? David you open up Matthew 5 verse 41 onwards it says LOVE YOUR ENEMIES ! later on If i read the Book of Acts I will Not say ohhhhhhh DONT BELIEVE IN MATTHEW chapter 5 it was just for old time .!Glory to Lord Jesus ! you speak the truth and in Bible its written that it is not who we speak but the spirit o GOd AMEN LOVE YOUUUU AMENNN

Suleman, I admire your zeal for the Word. Do we Christians have any Scripture that was for a particular time and not for us now?

The Spirit of Hate (Muhammad)is in every Muslims, a Generational Curse! Their Heart are wax Cold, He has NO Love in Him!

I don't even think his real name is John Smith, but I cracked up when you responded "do you kiss the black stone with that mouth?"